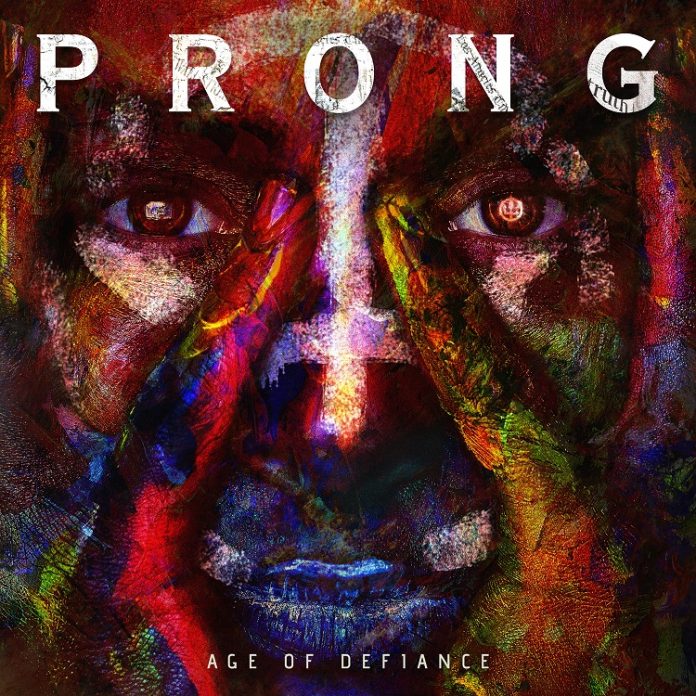 It is interesting that Prong were touring with Agnostic Front earlier this autumn. On MV the other day we ran a video in which AF main men Roger and Vinnie explained how NYC Hardcore had become a brand that had gone around the world.

The same, broadly, is true of Prong and not just because Tommy Victor – the soul continuous member since the 80s – started as the soundman at the legendary CBGB’s, but ever since those early days it seems as if the band have developed a sound that only they have.

“Age Of Defiance” is a perfect example of that too. The title track and the second cut “End Of Sanity” are fresh. Brand new. They weren’t on 2017’s “Zero Days” and they may not be on the follow up that is being planned for 2020. They are strong enough to be. This current line-up of the band – joining Victor are bassist Jason Christopher and drummer Aaron Rossi – have been in rich form, and that is true here too.

Both the newbies are very Prong take on thrash. That is to say that you only call it thrash because you don’t know what other hook to give it. Hook is good word too, given that somehow Victor always manages to write something memorable, catchily vicious is a good way of putting it, actually.

The other three – all recorded on a tour of Germany – prove that whatever gift TV has (a spiritual man, he reckons it has come from God – he has always had. The title track from their mid-90s thing “Rude Awakening” is totally different to other music of the time (I know because I bought it then) but totally true to the band and their sound.

The same goes for the other two as well. “Another Worldly Device” – the lead track on the 1994 major label breakthrough and which broods menacingly here – and “Cut Rate” which was also there a few songs later, still sounds just as good as ever.

I’ll be honest, when I first heard of the EP I thought “stop-gap”, because these things usually are. Not this though. In fact, everyone sounds incredibly focussed here.