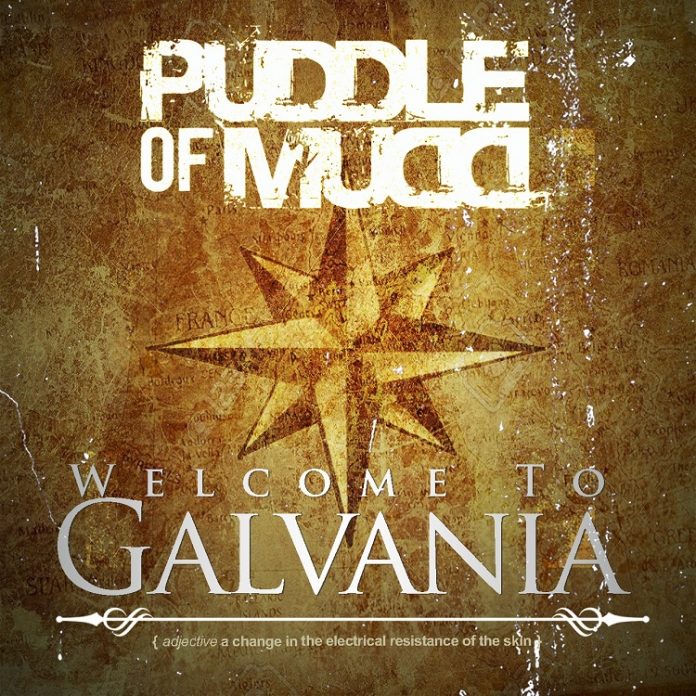 Not being the most observant, I didn’t actually notice the definition for “Galvania” was right on the cover of the new Puddle Of Mudd album: “a change in the electrical resistance of the skin” it says.

Before I’d seen that, I’d googled the word.

Magnificently I found this: “Galvania, designated as NGC 4293 by human astronomers, is a small spiral galaxy situated about 56 million light years away from Earth.”

And I am telling you right now, that if there is life on this planet, someone will know “She Hates Me”.

Not that anyone wouldn’t want a mega hit, of course not. Like Ozzy once said when Kurt Cobain was complaining in the press about “Smells Like Teen Spirit” being a millstone, “if you don’t want anyone to hear your songs, then don’t come out of the garage!”

But it does seem that some bands are more able to shake off the legacy of those hits than others. Wes Scantlin, the only Muddy funster left now – often outspoken, he has dismissed his previous bandmates, thus: “Sometimes in life you come across people who want to bring you down and rip apart your soul. Well, those days are gone. I have surrounded myself with a great team of people.  They believe in me and I believe in them. I’d like to thank each and every one of them for their hard work and perseverance.”

So, all of this bears all the hallmarks of fresh start – and it is their first album in 10 years –  but if it is a fresh start, then it is one that is achieved by embracing the past.

Then there’s the bratty Sk8er Boi type anthem. You think “She Hates Me” is annoying? Check “Uh Oh” out, bruv. Then try and hate the sodding thing. It’ll go like this. “Blimey, that’s crap.” Then you’ll be in the shower singing the chorus, trust me.

So having established that, basically that Puddle Of Mudd 2019 are just Puddle Of Mudd, we can set about enjoying the rest of it. “Go To Hell” is midway between anthemic mega hit and grungey nihilism – and the solo screeches out of nowhere, which is fun.

“Deceased Almost” rockets along like early STP, and the riff slams, “My Kind Of Crazy” is a slower mid-paced ballad – the sort you can imagine being a prom song for the kids next summer given the right circumstances – and the same thing is true of “Time Of Our Lives”, the sort of homage to the youthful summers that I never had, but someone must’ve as they are a rock n roll staple.

“Sunshine” couldn’t be any more 1995 if it tried, and the idea that nothing here has any interest in modernity is shot right through “Just Tell Me” – verses that don’t half have a feel of Oasis about them and a loud/quiet dynamic in the chorus that hits the spot, while “Kiss It All Goodbye”, and I’ve thought about this for a week…..its like this. If the rest has hinted at Alice In Chains influences, this one is the bit in Scooby Doo where they pull the mask off.

It is striking that a lot of these are mid-paced and “Slide Away” finishes things in that way (give or take a “clean” version of “UH-Oh” which is better than the sweary one) and with it over, there is a chance to reflect.

Puddle Of Mudd were always lumped into nu-metal. They were never that. “Welcome To Galvania” rather underlines they are basically a grunge band. Just one that has a knack for writing stupidly catchy pop songs.