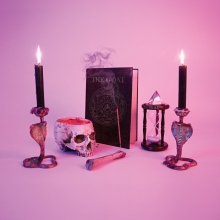 Cards on the table here. Everyday I get records sent to me that make claims of greatness for the act concerned. It’s PR you see, that’s what happens. Over the years (and because I might have to stretch the truth myself in my proper job) I’ve learned to ignore this type of thing.

But then, the other day, the debut record from Puppy turned up, and this paragraph, well, it intrigued me:

“And now, with The Goat, we see Jock, Will and Billy diversifying even more, taking the left-field melodic turns of Weezer, the hazy fuzz of Smashing Pumpkins and the straight-to-the bone sonics of the Big Four of Thrash to fashion an idiosyncratic sound that is truly unique – a melting pot of collective interests and ambitions, and one that hides a dark, bloody, occult-esque heart under its catchy melodies and scream-along, festival-ready choruses.”

OK, I know what you’re thinking, that is a) bollocks and b) you’d have to be a serious genius to pull that off.  Well, here’s a thing. Puppy have shared bills with everyone from glam-punks Creeper through to doom metallers Conan and skater boy icons CKY – and I’ll guarantee you that they fitted in. Because for once, the PR stuff, it is absolutely true.

That much is as plain as the nose on your face from the start of “Black Hole”. It kicks in with a riff that is dark and thick as molasses, but then the vocals of Jock Norton arrive and all of a sudden all is sunlit. And, my, my how these boys can write a chorus. These aren’t ones you can hum. These are ones you’ll spend your morning singing at work. After the first time you hear them. I know this, trust, bruv.

“Vengeance” just for grins it seems adds a metal side, but the hook has harmonies. In fact, to be blunt, if Iron Maiden were a young band these days, they wouldn’t write “Wasted Years”, they’d be writing stuff like this.

Best of all – and for clarity that means its exceptional – is “Poor Me” (which is the one I spent the morning singing) it doesn’t burrow its way into your brain, it smashes itself a hole in your skull and makes you put the kettle on. And the lead work here – dear me.

To be fair, too, “Just Like You” isn’t far behind on the awesome stakes either, and there’s a touch of grunge about this, while “And So I Burn” – and lets not be coy here – has the energy of Judas Priest circa “British Steel”, but if Puppy are gonna break the law then they’re gonna do it their way and that way is with a pop soundtrack. But they hide their pop particularly well behind some black song titles. A re-recorded, “Entombed” takes a turn into some Stabbing Westward style industrial wasteland, but still manages to reach for a massive arena rock kit bag while it does.

Four songs here are produced by Tom Dalgety (Royal Blood) and you can hear the same ambition and – yes – quirkiness here. There’s a thunderous bass groove about “World Stands Still”, “Bathe In Blood” makes good on those Pumpkins comparisons, while there’s a buzz and a fuzz about the mid-paced “Nightwalker” that recalls Johnny Panic from way back when.

“I Feel An Evil” is more punky and sees bass player Will take the vocals with a real lip-curl, “Handlebars” has a screeching lead guitar about it and a desire to be dry as dust that QOTSA might be impressed with, before “Demons” – the other of these 12 that has been heard before – finishes things off, with a riff that The Wildhearts might have used on “Earth Vs.”

In fact I’ll go further. Rarely since The Wildhearts (who just happen to be my favourite band) has anyone melded unashamed pop melody with outright heavy and managed to sound like no one else. Look, we’re only just into 2019, so its too early to start saying “album of the year” and all this. So instead, can I just say this: If you hear a better, or more original record than “The Goat” anywhere in the next 12 months, can you chuck it my way. Because this is genuinely stunning.

ARTIST OF THE DAY: KERRI WATT