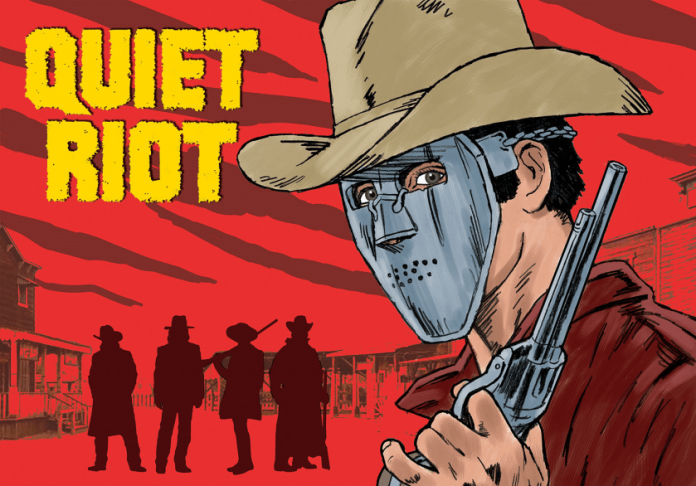 Back in 2004 when Kevin DuBrow was found tragically dead, it felt like Quiet Riot were over. Actually in the immediate aftermath, they were over, but then manager and founding Drummer, Frankie Banali (rather like Black Star Riders did with Philomena Lynott) sought the permission of DuBrow’s mother to carry on.

They did, first with Jizzy Pearl (who had oddly been in Ratt, the only time I ever saw Quiet Riot play, at the Hard Rock Café in Las Vegas, and yeah, that was as cool as it sounds, Cinderella headlined, by the way and Firehouse opened…..) on the so-so “10” and then – eventually – with James Durbin.

Durbin was a former American Idol contestant, who had appeared, almost literally as the 2017 “Road Rage” record was about to be released. Indeed, if memory serves, it wasn’t released on time to allow him to record the vocals that had already been laid down.

In the circumstances, actually, “…..Rage” wasn’t too bad a record, but it does mean that “Hollywood Cowboys” feels a lot more unified.

And what of Durbin? Well, he truly sounds at home here, whether it be on the opener “Don’t Call It Love”, which has a tinge of “Wild Side” era Motley about it, or on the overtly bluesy “Roll On”, which sounds absolutely sultry.

The only inference we can draw from that is he is a fabulous singer, one that can handle everything that is thrown at him, and this is the best QR record in a long, long time.

Alex Grossi has got the glam swagger back, and his sleazy work on “In The Blood” for example, is exactly the type of arena shaker you want from the band. Banali’s drumming underpins “Heartbreak City” in such a way that you expect it to turn into “I Love It Loud” at one point, but then right from the time they became the first metal band to top the US pop chart, Quiet Riot have always found a way to reinvent themselves and their sound.

So it is “Devil You Know” has a modern tinge that belies a band that has a over 40 year history, and “Change Or Die”, which seems to take this idea and move it forward, has a darker, heavier edge than many of their peers could manage, while all the while remembering their legacy.

There is a bit of the Van Halen’s about “Insanity” – in fact, make that more than a bit – but it is rip-roaring fun all the same, and there is a defiance, a stoicism, if you like, about “Hellbender” that sort of shows that Ronnie James Dio’s influence remains strong.

“Wild Horses” has the Radio Hit thing going on, and whilst there is nothing overtly ballad-like here, “Holding On” is more nuanced, in that it starts with acoustics, then builds. Not prog, but there is a grown-up, thinking man’s rock n roll feel here, which is balanced out neatly by the balls out, adrenaline rush of “Last Outcast”.

That might show a well-paced album, and it ends with a crescendo. “Arrows And Angels” isn’t full on heavy metal, but it has a shade or two of Priest, that’s for sure.

But then, that’s what Quiet Riot have always done. Pushed the boundaries and made those their own. That’s what they do on “Hollywood Cowboys” and that’s why it is so good. Saddle up.

Note: around the time of release, back in November, Banali went public on his Stage 4 Pancreatic Cancer. I’d like to wish him all the best as he fights this awful disease.