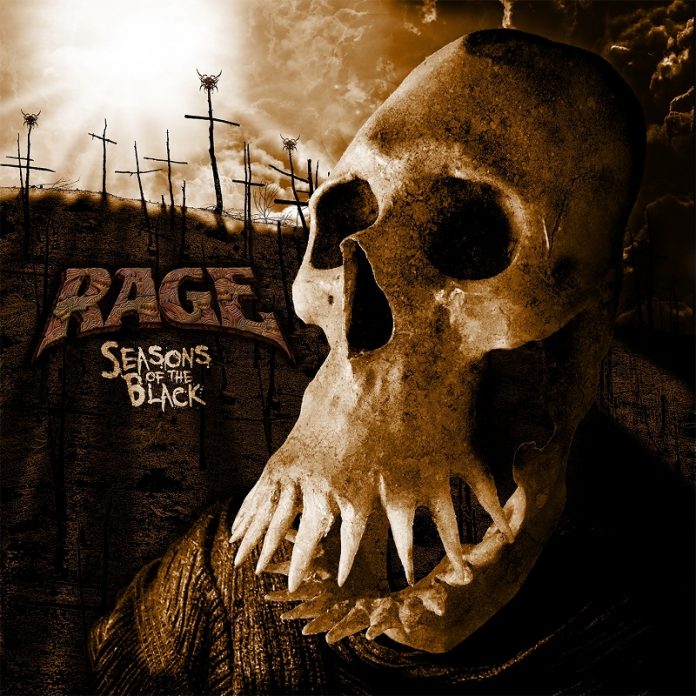 Peavy and the boys are back at it

There is something gloriously unfussy about Rage. German heavy metal legends, they are a real throwback.

And not just in terms of sound either, but rather in work ethic. “Seasons Of The Black” is their 23rd album, and comes barely a year after the brilliant “The Devil Strikes Again”.

As you might expect, the two records are very much companion pieces, two halves of the same whole if you like, but judging “……Black” on its own merits is perfectly simple. It is a brilliant slab of heavy metal.

You can largely forget the idea that they are Power Metal (a genre for some reason that they get lumped in with) – that brings up ideas of parping keyboards and verbose arrangements. That doesn’t suit the trio much at all, this is a metal white knuckle ride.

Proving it by kicking off with its near title track and an almost thrash intent which sees main man Peavy Wagner – the man which the band has revolved around since its inception – spit his vocals with more viciousness than usual, the record has a mark of class all the way through.

Much of this is down to the fact that rarely for Rage they have a settled line-up and Marcos Rodriguez on guitar is in rare form, while Vassilios “Lucky“ Maniatopoulos pounds his drums as if he’s punishing them.

Happy to write proper hooks too, rather than just be an exercise in violence, songs like “Serpents In Disguise” possess a fists in the air gloriousness, while “Blackened Karma” sees the monstrous bass of Peavy himself take centre stage.

“Time Will Tell” with its harmony backing vocals takes the album into a different area, and “Septic Bite” which is a chugger with a real air of violence about it is a real highlight.

Capable of genuinely monolithic moments too – nowhere better is this shown than on “Walk Among The Dead” – “Seasons Of The Black” is a collection that moves deftly and skilfully into whatever gear it wants to go in to. And on “All We Know Is Not” it finds a setting marked “overdrive”.

The last four songs on the album are a collection that are bound together as “The Tragedy Of Man”, and this really shows their undoubted skill as songwriters too. The opener of the suite “Gaia”, the Dream Theater-esque overture of “Justify”, the dark “Bloodshed In Paradise” and the epic “Farewell” can all be enjoyed as stand alone songs – and all are excellent – but together they are really special. It is a trick that Rage have used before, notably on albums like “Welcome To The Other Side” but they’ve never done it better than here.

It gives “Seasons Of The Black” the conclusion it deserves. But moreover it shows that this version of Rage is not content to live on past glories, rather they are striving to take themselves to places they’ve never been before, focussing instead on pushing themselves and the boundaries of what they do.

They have every reason to be extremely content that on “Seasons Of The Black” they’ve done just that.