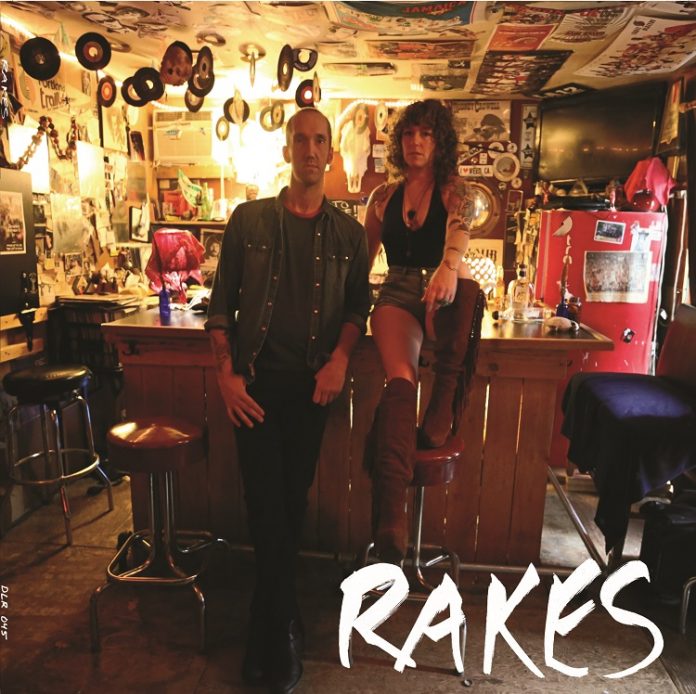 Rakes are a male/female-dual vocal ensemble hailing from the Pacific Northwest`s Portland in Oregon. Portland seems to be known for its hipster and liberal outlook on life, strangely this port city has the highest number of strip clubs per capita in the country. The band are comprised of guitarist/vocalist Andrew Foster, vocalist Chelsea Walker, bassist D. Rives Curtright, drummer Tim Hanson and keyboardist Jake Kersley. They have a self-titled, debut full-length album which contains eleven cuts of soulful rock.

The album opens up with `Long Road` and it`s a fiery introduction with guitar chords blazing, swirling organ and the twin vocals almost blasting at each other to be heard. Wonderful stuff.

Although `Carved In Bone` isn`t as in your face as the opener, it`s a cracking organ led offering with the vocals interspersed at just the right time with a tambourine seemly being shook along in the background.

`Dig Deep` relates a dark and disturbing tale about a man catching his wife cheating and making her dig the hole to bury herself in. There`s some real gutsy interplay back and forth between the two singers and some excellent distorted guitar riffs and some brass tinges.

I really enjoyed the echoey drum sound on the laid back and soulful `Stay With Me` with its blaring horns and piano swirls that allow Andrew and Chelsea to showcase their diverse vocal range.

I felt there was a real Rolling Stones vibe about the bluesy, rocky `Three Days` while the guitar driven “78` had a real retro feel about it.

There`s a lot going on with the ballsy `Don’t Know Why` a quite in your face number with heavy swirling organ and Chelsea Walker`s superbly powerful full throttle vocal assault. A really blistering piece where at one-point Chelsea almost halts the song before resuming her strident intensity.

`Dead Once Again` and `Annie Mae` are more relaxed, easy-going soulful offerings, almost the calm before the storm that storm cyclone coming with `Sinner. `

There`s a real arrogance about `Sinner` with its thumping quite hypnotic drum beat and chugging guitar chords that allow the vocal duo to almost stand up and repent the sneering chorus of “I know that I’m a sinner” which`ll end up swirling around your subconscious.

I have to say there`s no better number to close out this album than the stripped back acoustic `Whiskey Woman` a quite touching and emotionally moving account that clearly displays the dexterity of range that both vocalists enjoy.

I have to say I was really blown away by Rakes debut album. It`ll appeal to not only a traditional rock audience but anyone who has an interest in the more soulful and bluesy side of rock. It`s at times loud, brash and in your face but then stuns you with an unexpected tenderness. A mature, rich, and rewarding offering for any bands premiere.