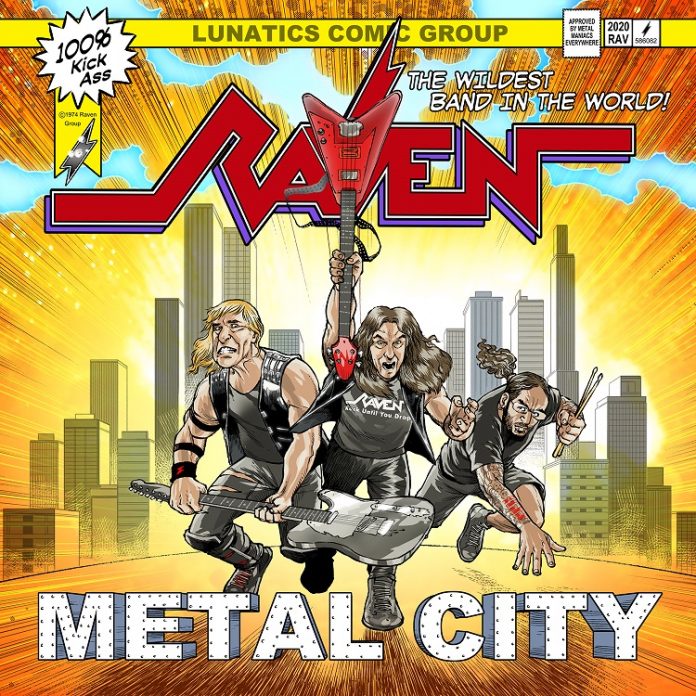 It’s tempting to say that familiarity breeds contempt, but its not really that. Instead, isn’t it more that bands that have just, seemingly, always been there get forgotten about?

That always seems to be apt with Raven. Now in their fifth decade as a band, the first Gallagher Brothers (there is another set somewhere, I think?) have been making metal since 1979.

That phrase alone, perhaps, conjures up things that aren’t there. Like lumpen pub rock, sounding dated. The truth with Raven, though, is a lot more complicated – and better – than that.

There was a live album last year that reminded everyone of the talents, there was an album five years ago, “ExtermiNation” that was rather good, and now there’s “Metal City.”

For this one, John and Mark have recruited drummer Mike Heller (Fear Factory), but that only tells half the story. Now based in the US, the Geordies went to Nashville and recorded “….City” in the legendary Michael Wagener’s studio, before giving the album to Zeuss for mixing.

This is normally the minutiae that I don’t concern myself with in truth, yet somehow here, it is the most important thing. Because, “Metal City” sounds like a million dollars. It sounds modern, clean and it absolutely leaps out of your speakers like it means business, ready for the attack.

The result is the gallop of “The Power” is just that: a powerful run through all things metal. And its not like they’ve changed sound, either. “Top Of The Mountain” has the same bluesy boogie that surely they would have had back in the pubs in the North East in the 70s, but goodness me, it sounds like they own it here.

Lyrically it carries on with the same themes as “ExtermiNation” – “Human Race” concerns itself with the apocalypse essentially, but it’s the end of the world that seems set to be brought in on the back of Heller’s drums alone.

The title track is the sort of thing that Dee Snider has been doing recently. A fists in the air celebration of the music itself, while the likes of Saxon and Priest are recalled in “Battlescarred”, but I’d contend this: This sounds more modern than any of their contemporaries. Power metal bands all over the place would love this, but if you think – like me – that Manowar are terrible, here’s how it should be done.

Where the aggression in the likes of “Cybertron” comes from, its perhaps best not to ask. “Motorheadin’” is palpably their “Overkill” moment, if you like (Lemmy’s image is even on the sleeve) and only a band that has lived on the road for 40 odd years could glory in it like they do on “Not So Easy”.

The brothers have something special. Mark’s riffs and John’s vocals are in perfect sync here. John’s bass too, is right from the top draw, “Break” adds an almost punk speed, before the last one “When World’s Collide” is very much the epic here. On a record where speed and brevity is the king, here they let themselves go for more than six minutes and do a fine job. Indeed, if they had fancied making that type of album, there’s no doubt they could have. Just this time, it seems, aggression and fight was the key.

And that battle, well, it might have been for metal itself. The sleeve is made up of a series of comic book images where the boys win out – armed only, it seems, with the power of the riff. Their victory never seems in doubt, really. If you thought you knew Raven, think again: “Metal City” might just be a career high.