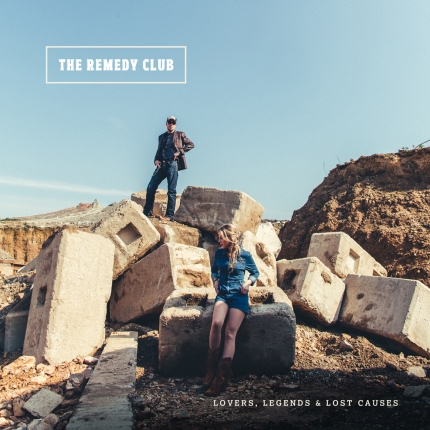 A change of name, but no dip in quality

Aileen Mythen & KJ McEvoy used to be B And The Honeyboy, but for “Lovers, Legends And Lost Causes” the husband and wife duo have undergone a change of name. Fear not, though, the class, the skill and the incredible ability to write wonderful country-flavoured, rootsy Americana continues unharmed as The Remedy Club.

As you would expect from a couple, there is an instinct at work here. Right from the gorgeous harmonies that are all over “I Want You” it is clear that these 11 songs are special. As if from nowhere, right in the middle of the track comes a blistering solo from McEvoy and that perhaps tells you that this isn’t quite the usual Lap Steel drenched stuff you might have expected.

Instead, there is a mournful quality to “Come On” – and the strings from KJ’s sister Eleanor lift not just this one, but many others – while fun-filled work like “Big Ol’ Fancy” is capable of rousing the rabble down at the honky tonk with the best of them.

The harmonies bind the songs together and give them a coherent thread, but each is distinct. For example there is an old-time and quirky feel to “When Tom Waits Up” with its almost mariachi flavour that would please the man himself no doubt, and “Last Song” – despite it’s lyrics – is a wistful acoustic piece of sunshine. This is followed with the insanely catchy “Bottom Of The Hill”. “I tried to be good, man, but being good has never really been my style” offers KJ as he takes the lead here, but the hook in this dark tale will stay with you.

Mythern possesses a voice that can convey emotion like few others and there is a real Cash Brothers vibe to “Get Away With It”, which has some fine organ playing too. The record was made with some of Ireland’s finest players and has been mixed in Nashville by 5-time Grammy award winner Ray Kennedy (Steve Earle, Lucinda Williams, Willie Nelson) and Mark Petaccia (Jason Isbell, Lindi Ortega), they have done a brilliant job and it sounds sonically mighty.

The songs match up. “Django” is a fitting tribute to the legend that was Reinhardt, and there is a feel of the 1920’s prohibition era at work here and “Listenin’ To Hank Willliams” – even down to the yodelling – probably doesn’t need to be explained, except to say that someone, somewhere is bound to use The Memory Club for similar relaxation in years to come.

Because although it is rooted in the past, it is very much of the present, “Sweet White Lies” for example sees Mythen opine “please don’t send another text” and even when it goes for timelessness, as on the closing “This Is Love” it does without heading into reverie.

“Lovers, Legends And Lost Causes”, with its Intelligent wordplay and ability to skilfully nip off down whatever tangent it chooses the record is a stark reminder that albums can still be both an ear for classicism yet still very much be of in its time.