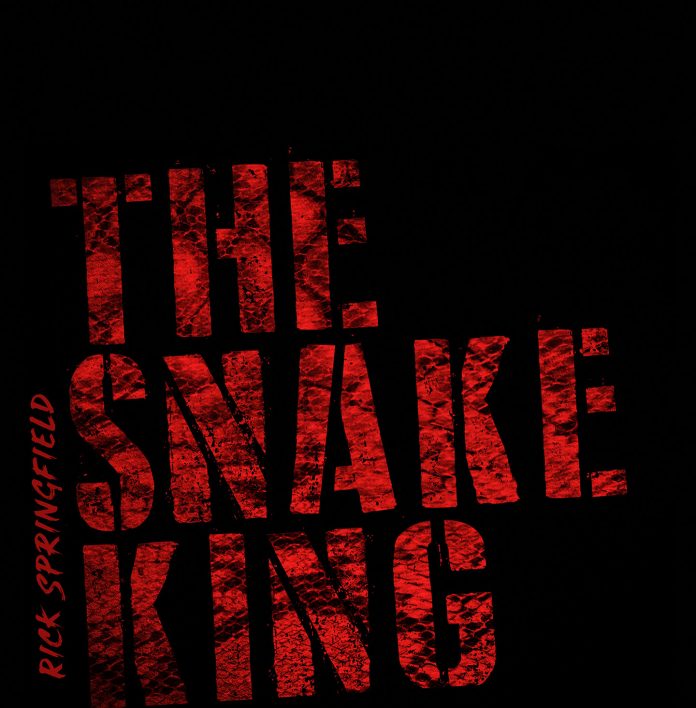 The symbolism isn’t lost on me. The start of “The Snake King” – the first song, “The Land Of The Blind”-  is ushered in with the Producer saying: “hey, Rick, one second please.” Rick Springfield ignores this and just plays. And it’s what he plays that really takes you back. Over the course of the next five minutes he delivers what amounts to his State of the Union address, if you will. Over a slice of Springsteen rock n roll he takes everything to task.

The inference here is simple: this is Rick Springfield in 2018. He’s got plenty to say. He’s going to say it, and you best keep it out of his way.

That spirit extends throughout the album too, the quite brilliant blues of “The Devil That You Know” adds the best horn flourish you’ve ever heard. It also has lyrics that suggest “bad boys are an aphrodisiac” and then claims that “Jesus unfriended me on Facebook”.

It is a feature of “….King” that it is a very wordy, but exceptionally clever record. But where something by Bob Dylan, say, however brilliant it might be, is poetry that you never quite penetrate, that isn’t the case here. On things like “Little Demon” (possibly the only song in history to rhyme “god” with “nimrod”) it is kept extremely simple. That’s partly because Springfield wants to get his message across, but also the album is a vehicle for some quite wonderful blues guitar playing.

The classic 12 bar honky tonk stuff of “The Judas Tree” can’t resist a dollop of sass, with its ending thought that “they say when you die hanging, you get hard as you go down” but you rather suspect the engine room of the record, as it were, are the trio of songs in the middle.

The harmonica drenched “Jesus Was An Atheist” is deliberately provocative – he was good at “pulling girls” apparently – the swampy title track which begins with the line “I am looking for your back door” and takes in chainsaws and Vicodin before it gets to the first chorus, and the astonishing “God Don’t Care” which rounds on the super rich and religion in extremely strident fashion,  all seem as if they particularly important to the artist and a dislike for organised faith seems to be to the fore.

“The Voodoo House” has the same dark blues thing as Chris Whitley used to get going, “Suicide Manifesto” is look at mental health, and the mid-paced “Blues For The Disillusioned” passes for a ballad on this collection, but still finds Lemmy and Joan of Ark in an unlikely friendship. Such is the way here, when anything goes and everything works.

“Santa Is An Anagram” is more than “Johnny B Goode” reworked, and is as vicious a condemnation of consumerism as there’s ever been but there is a real sense of fun too, Ghandi is beating up a flower child at one point, but it seems as if everything here has been gearing up to the closing “Orpheus In The Underworld”. A ten minute, almost stream of consciousness thing, it is as incessant as it is brilliant, the wonderful organ, only adding to the Dylan type feel. Big business is the target here. “They turn the planet into dust,” he spits, “and your children’s lives to shit.”

That all might give you the clue that this isn’t the record you might be expecting from a singer at this stage of his career. Expectations be damned it seems to say. This is very clearly a record that Springfield needed to make. And, if like me, you were only aware of Rick Springfield in the very broadest of terms before now, start here. Get yourself in the snake pit, because there is a very real possibility that “The Snake King” is the album of the year so far. Now, if you’ll excuse me, I’ve got a back catalogue to check out.