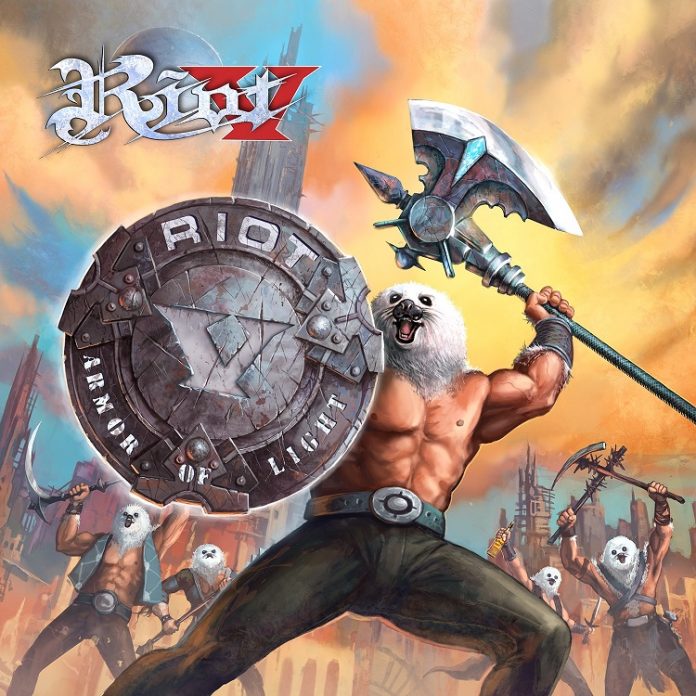 For over 40 years Riot have been holding their swords aloft for metal in the most metal way you can imagine. And this new album makes no bones about the fact it is going to do the same.

There’s a line in “Victory” – its opening song, that sees Todd Michael Hall (the bands fifth singer and partly the reason for the Roman numeral) scream “rise up, your swords of steel for the souls you’ll save” and I’m willing to bet they’re on a crusade for metal.

The music too, is like some turbo-charged version of “The Trooper” with the fastest double kick drumming you’ll find just about anywhere, courtesy of Frank Gilchriest – and what’s more, its ace.

All of it. From the lyrics, to the music, to the phenomenal cover, screams “METAL!” and what’s more, Riot V (or the other four eras too) is metal as people who don’t like metal understand all of it to be. It is grandiose, pompous, tremendous fun and brilliantly done.

“Messiah” gets all biblical. And if the end is nigh then crikey its coming in loud. “Angels Thunder, Devil’s Reign” ushers itself in on a tidal wave of bass guitar, and this is unashamed to be some cross between Dio and Priest: heavy metal runs through the veins? You bet!

“Burn The Daylight” is for all those who are racing their hot-rods at (two minutes to) midnight. It’s fast, its furious and it doesn’t care at all for the consequences, either.

“Heart Of A Lion” gets all historical, Richard The Lionheart (if you hadn’t guessed the subtleties) the title track is a gallop of rare quality and if the drums are set on overdrive throughout, then that is seemingly even more so here.

That, though, isn’t to say that Riot V are one trick ponies (although the damn trick is fabulous) and if their stated aim with this first record for Nuclear Blast is to get a younger audience, then work like “Set The World Alight” – which is close as these boys get to brooding – will help, and the superb “Caught In The Witches Eye” with its Thin Lizzy style double guitar and hints of horn – while all the time remembering to keep fists in the air – will help them cross over just fine.

“…Light” though marks the 30th anniversary of “Thundersteel” – the classic power metal record that was probably the first that the 13 year old MV heard and there is enough in the likes of “Ready To Shine” and “Raining Fire” to keep the old hands happy too. Metal ain’t ever gonna die while these riffs fly, it seems to say.

The point to all this – if there is one? – is encapsulated in the opening to “End Of The World”. Backing vocals stacked a mile high, say this: “come, we must fly, oh you and I. We’ll find escape at the edge of the world.” and this is all about escapism. Christ knows, turning the news on these days is a scary business, what if you could transport yourself to the edge of the world with only your metal sword for company. You’d do it. You know you would. Riot V have. It’s called “Armor Of Light” and it’ll take you somewhere loud and bombastic for an hour. And it’s brilliant.