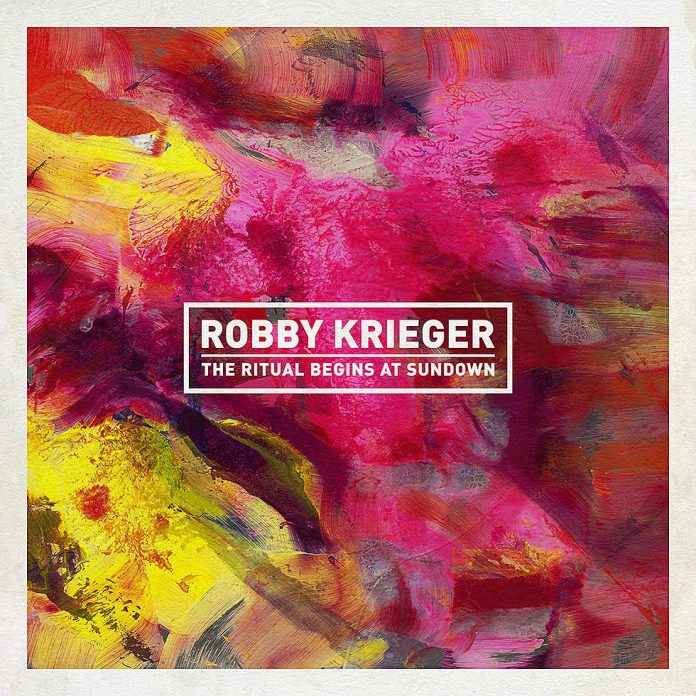 The genius of the former Doors man is and never has been restricted in his abilities to his work with messrs Manzarek, Densmore & Morrison.  On solo album number 10, and after decade away, he lays it out as clear as can be as to why he is so highly revered.

If anything is going to brighten this Covid-afflicted summer for music lovers then it is new music from The Doors legendary guitarist and songwriter Robby Krieger.  A Doors-fan of geek-level proportions myself for the last 30 years I could extol the virtues of Krieger ad the band that cemented my love of music until I had no more words to speak.  However, the purpose here is not to look too much to the past but focus on the present.   Put aside is the psychedelic rock and for the most part the blues that he helped to redefine and this is essentially all about the Jazz.

Album opener is the strutting  “What Was That?”, a six-minute delightful easy flow of rhythm and melody punctuated by Krieger’s stunning soloing which blends effortlessly into the mood of the track.  It has been a decade since Krieger’s last studio recorded output and that time has flown by but has also been much the poorer without his unique and emotionally  intelligent musical style.  This opener is a stunning reminder that engrained talent never leaves you even if you pack it away for a while.

“Slide Home” was released before the album came out as a brief taster as to what you could expect.  That said it stands alone as a melancholic work that is smoother and more serene than the other tracks on the album, perhaps aside from the album closer “Screen Junkie” which shares its laid-back groove and intent.

Given that Frank Zappa’s legendary producer Arthur Barrow is on hand to lend his ear and production skills to the mix along with more than a handful of old Zappa teammates such as Jock Ellis (Trombone), Sal Marquez (Trumpet) and Tommy Mars (Keys) then it perhaps wonderfully inevitable that we may get some of the old master Krieger-style.  So it came to pass that “Chunga’s Revenge” is the track chosen and brilliantly executed in a way that pays homage to Zappa’s immesurable talent and how an artist working at Zappa’s level could still take his music and stamp it with his own mark.  No easy task.

There is joy and controlled intensity to be found all over this album, whether it is the Blues-soaked guitar refrains of “The Drift” or the dirty-Jazz smoky stomp of “The Hitch” or the playful “Hot Head” there is nothing but pleasure to be had from Krieger in 2020.

In Krieger’s own words he states the following on how the album came about: “I was hanging out with my buddy Arthur Barrow and we had some songs we had been fooling around with then we got some other friends involved,” A lot of inspiration and musical genius can come from “fooling around” it would appear.

Another highlight in an album stacked with them is the cover of his Doors track “Yes, The River Knows” here laid bare for the simple genius that the track is.  Stripped of vocals it sounds stunning and unrestrained particularly Krieger’s guitar work.  It is the least jazz track on the album but fits in perfectly.

This album is pure enjoyment of experimentation and allowing the creative juices to flow wherever they may.  Everything on this album works and works to perfection.

The Ritual Begins At Sundown is out on 14th August via his new home at The Players Club, a division of the Mascot Label Group.