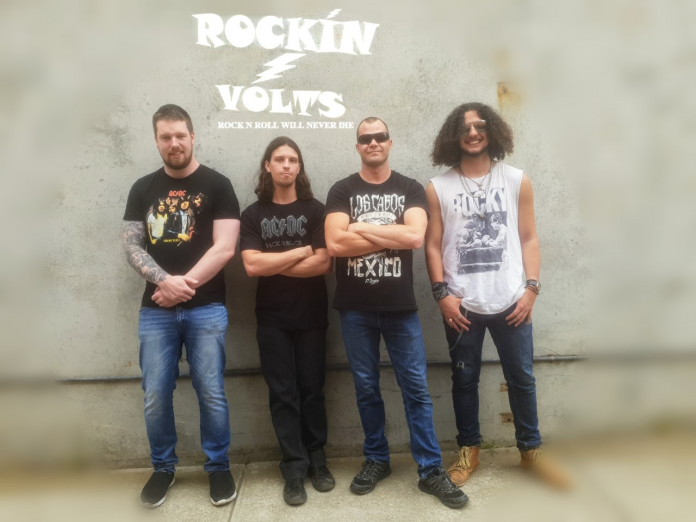 Sometimes, things are exactly what they seem.

The first line of this EP, after a riff that would make Joel O’Keefe jealous is this (I think – but it’s about the spirit anyway): “we brought rock n roll to the scene; it’s time for a return, if you know just what I mean”.

To back track, the other day, this email arrived at MV Towers (ok, it was to my phone, but come on, like the band, I can dream, right?)

Our aim is to bring the Aussie old school energetic rock n roll scene back to Melbourne. With high hopes we can spread our sound & love for Rock N’ Roll across Australia and the world.”

Look, it’s hardly going to be an Avant Garde ride into experimental psychedelia is it?

“Rockin’ Volts” do exactly what you think they are going to, and that’s exactly why it is so very good.

Because listen to the opening riff of the eponymous title track and you can hear it. And in this case, “it” is the sheer enjoyment, the sheer glee, and undoubted love for this music.

“Ballbreaker” – and given that the band have a name that is “inspired” by AC/DC, even the song titles are probably a homage, is like a maelstrom of Airbourne jamming with The Lazy’s while drinking with Rose Tattoo.

Ain’t No Woman” ushers itself in with a bass groove that is utterly filthy, but it’s soon into its work. Dylan Stevens and Tyler Theo are a twin axe attack of real skill and this, in common with the rest, is absolute fun, as well as being really well done.

There’s an AC/DC cover (naturally), but “Let There Be Rock” is glorious, and you can imagine Rockin’ Volts doing it at the end of their gigs, as the beers flow.

And I’ll bet too that the band formed at a show like that, as main man  – drummer Dean Weedon – sat there and thought: “I can do that. I want to do that. I need to do that.”

And good luck to him, because high voltage rockin’ should always sound this electric.