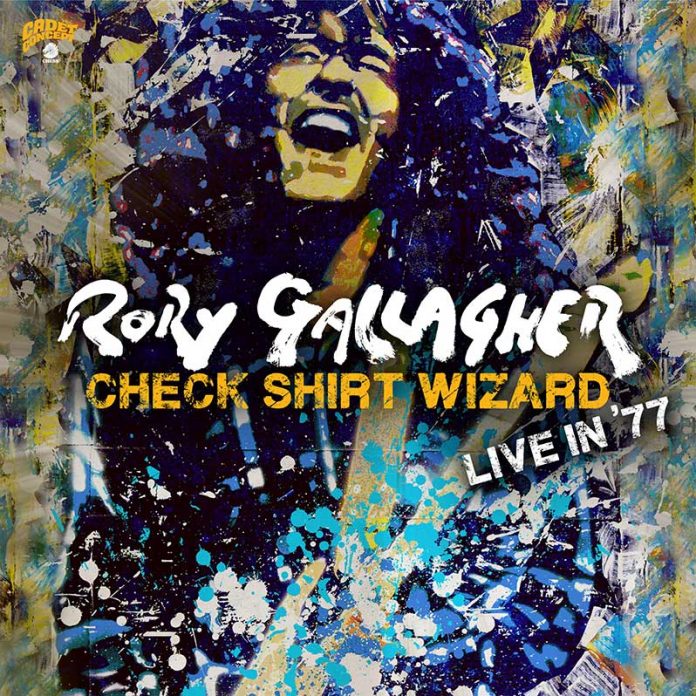 “This one you might like, it’s ‘Calling Card’, thank you very much”. Those shy Southern Irish tones make it seem like Rory Gallagher is searching for an answer, and yet, as the two hours on “Cross Shirt Wizard” so neatly prove – there has never been anyone like him.

“Calling Card” had been the title track on the album he’d put out the year before. And “….Wizard” is pulled from four shows on the tour that followed. All unreleased versions of the songs, it is yet another of the brilliant finds in the Rory vault, following on from last years wonderful “Blues” collection.

This one is as damn near perfect as you are going to get.

It’s the simplicity of what he does that most hits you. The start has a crowd chanting and then just two words: “Rory Gallagher”.

From then, a flawless “Do You Read Me?” is followed by a flawless “Moonchild” and a flawless “Bought And Sold” gives way to a ….well you get the picture.

There are a couple of things to say here. Even if, like me, you have never so much as strummed a guitar, you can appreciate a genius here. That’s a given, it feels like a cliché to say it, considering its so obvious.

But listening to “Check Shirt Wizard” something else comes across: the brilliance of the songwriting. “Secret Agent”, another of the “new” songs the band were playing on that tour, is a prime example. These are not just excuses to play some guitar, these are brilliant blues songs.

Mention of “the band” is important too, because although this was their last tour together, Messrs McAvoy, Martin and De’ath were in incredible form here. Lou Martin’s keyboards, in particular inform so many of these cuts.

“Walk On Hot Coals” – a version culled from a show at Hammersmith Odeon in Jan 77 – is a wonderful, shining highlight, the organ, the fact you can almost feel the joy with which he played his battered Strat, its all here.

It is after this, actually, that the scope of the talent here hits home.

The simple (what else?) “I am going to make a quick switch over here to a little bit of acoustic for a minute or two” heralds “Out On The Western Plain”, “Barley And Grape Rag” and an incredible “Pistol Slapper Blues”, and a raw “Too Much Alcohol”, as he casually pulls out four of the finest examples of Country Blues out of his back pocket.

The band return for a honky tonk romp through “Going To My Hometown” and the way Gallagher plays it, it almost seems like he’s trying things out on stage.  Elsewhere, “Jack Knife Beat” has a real soulful, funky edge, and “Souped-Up Ford” veers from primal to fun all at once.

“Bullfrog Blues” – a song that still resonates today considering the great Walter Trout chose to end his show with it last year – is the longest thing here, jamming wonderfully for nearly ten minutes, and there is a real “let your hair down” feel to it.

A classic rock tinge to “Used To Be”, is particularly noticeable, and “Country Mile” finishes the encore, but it’s the crowd chanting that feels so poignant. “Nice one Rory. Nice one son. Nice one Rory, lets have another one.”

Last week, I went to the last gig I’ll be at for a while, I guess. I saw my favourite punk band, another Irish group, Stiff Little Fingers. The support that night was The Professionals and they said something halfway through. “Here’s one for the old people in the audience…..” joked their singer, before adding: “mind you, you’re all old, aren’t you? If you’re young here, you are either here with your parents or grandparents.”

Not true, of course, but it does raise an interesting question of how music lasts and how a legacy is maintained.

I’d venture this as an hypothesis, it’s not rocket science. Being the best, helps. “Check Shirt Wizard” documents the very, very best.

So, like they sang at Newcastle, back on 18th February 1977 and its just as relevant today, some 43 years on: Nice one, Rory.