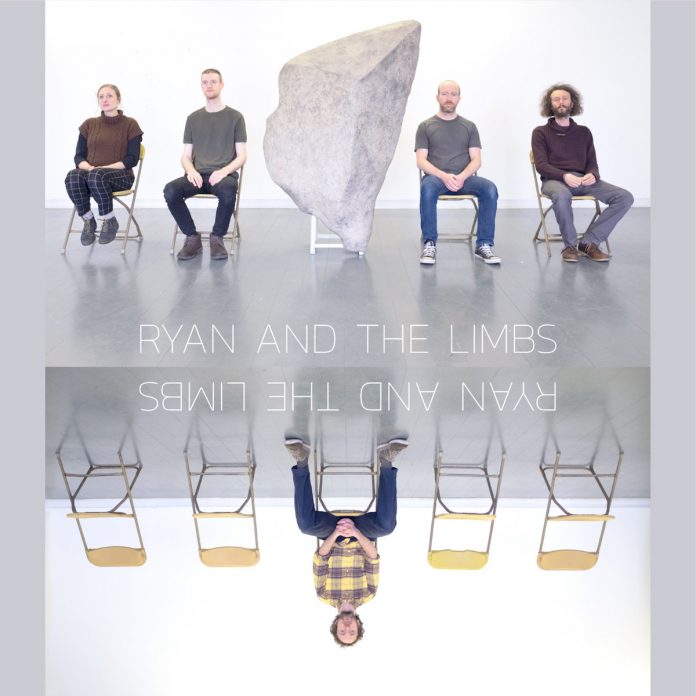 Ryan and the Limbs is an outlet for the musical ideas of Ryan Buchanan and this self-titled EP is the first music released under this name. Ryan has previously inputted to the Glasgow bands Adopted as Holograph and Future Fetish, the first as a guitarist, the second as co-writer, now he has graduated into creative charge.

Ryan himself has been everything from a rickshaw driver to a support worker to a drum-kit teacher and currently co-rents a makeshift studio in the east-end of Glasgow in which “Songmusic” took shape and was recorded. The musicians that make up the Limbs are a varied and interesting mix. Rob McGuire (bass), did a PhD on the metaphysics of emptiness, cut his musical teeth with John Macfarlane of Sluts of Trust but left before that name existed to be a Buddhist monk for seven years. Rory Clark (synth) is also the recording engineer. He teaches animation and samba and is about to branch out and perform in a theatre piece by Daniel Padden with a handful of musician-actors. Susan Appelbe (Cello) has played with everybody from Young Fathers to King Creosote and Roy Shearer (drums) has played with the ULTRAS and Hank Tree. So, a rather diverse and eclectic set of appendages to assist in fleshing out this debut release.

The opening track `Sisyphus` has a languid drum beat and odd keyboard splashes and is sung almost lethargically which adds to the atmospheric feel of this track. I was intrigued by the name so had to look it up on the net. Sisyphus (or Sisyphos) is a figure from Greek mythology who, as King of Corinth, became infamous for his general trickery and twice cheating death. He ultimately got his comeuppance when Zeus dealt him the eternal punishment of forever rolling a boulder up a hill in the depths of Hades. The lyrics are a little surreal but maybe it does relate to the moral of never giving up achieving or striving for a goal.

I loved `Axis and Atlas` some wonderfully off kilter drumming, intricate guitar picking and then a fuzzier guitar and keyboards with Ryan`s distant, almost hypnotic vocals floating in and out. The track had some stop / start moments which made this submission full of character and very mesmerising.

`The Vehicle` was very much a band pulling together with soft drums, bass line, guitar, synth inflections and the cello adding its own stamp. Again Ryan`s softly shared vocals add to the overall aura of this piece. The song does get a little noisy and slightly aggressive come challenging towards the end.

`Bully` is really simple but very effective. The almost repetitive plucked guitar and cello almost fight each other for space with the drumbeat seeming to egg them on. At times Ryan`s Glaswegian dialect shines through and adds a delightful antidote to proceedings. Midway through this aria, it takes a change of pace with the vocals, guitar and cello taking centre stage in a most compelling way. Eerie but excellent.

The penultimate piece `Idiot`s Throne` is another interesting offering where Ryan`s voice is almost chanted with the music quite spellbinding.

There`s really only one word to describe the final track `Big Players` and that is delightful. It ticked so many boxes for me. Wonderfully enthralling music and quietly shared vocals. A real joy to behold.

There is a real mystique and charm about the music offered up in this debut release. It`s hard to categorise it, indie rock, folk rock, alternative rock with some heavier leanings at times. Nevertheless, is has a real dream like beauty and has to be listened to on a number of occasions to really appreciate this. There are touches of King Creosote, Elliot Smith and Matthew Jay but that would be doing the band a disservice as it is very much ploughing its own musical path and identity. An enthralling introduction to a beguiling band.