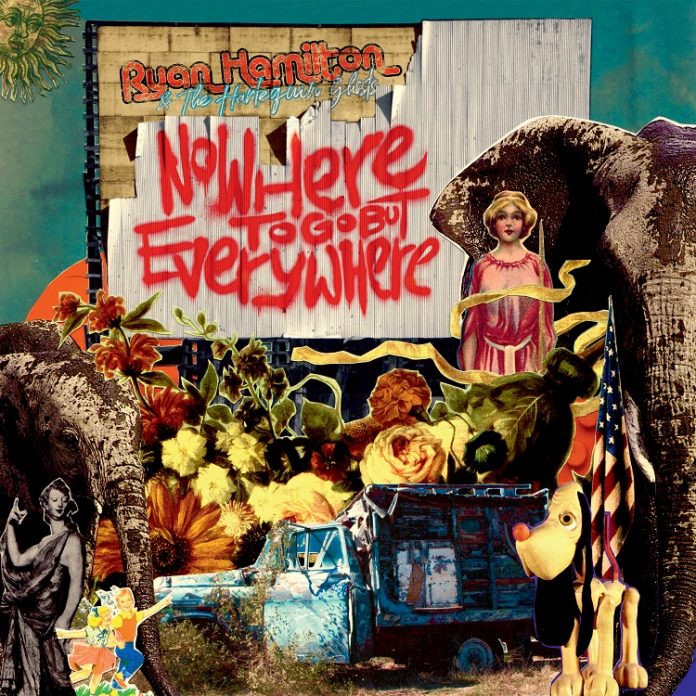 The title of this record.“Nowhere To Go But Everywhere”: what does that mean to you?

To me, looking at it, it seems to suggest infinite possibilities, total freedom, that the only thing that constrains us is ourselves.

I don’t know what it means to Ryan Hamilton, but I’ll have a guess that it has those things at its heart.

You see, this record was conceived on an epic road trip with his dog, Peaches, as he came to terms with his divorce. And as such, these songs are – I’d contend – the most personal of Ryan’s career.

Now, I know what’s going through your mind here, because I’ll admit I thought it too: middle aged man getting a divorce and writing an album about it? Christ, this is going to be tough going.

This, though, is Ryan Hamilton And The Harlequin Ghosts, and rather like his friend Ginger Wildheart, Hamilton has a knack, no make that a gift, for writing songs that take the most awful things and making them somehow perfect.

Exhibit A: there are 12 songs on this. I could have started this review with any of them, but somehow, “Jesus And John Lennon” seems to sum things up best of all. Ridiculously – and I mean insanely – catchy anyway, but the kicker is this: bare in mind this is a song about things starting out brilliant and turning to shit, right? Well, “like the Rolling Stones and Brian Jones, Linda Lovelace and oral sex….” How do you follow that? Who knows. That’s genius by any other name.

And that, essentially is Ryan Hamilton’s career in a nutshell. He’s got the songs, the skill, and now he’s got a band to back him that can carry it off.

“Only A Dream” kicks things off with something like a choral organ, and this opener is proof that this is a band that keeps evolving, the strings here add real depth and if its not quite the epic bombast of Spector and the Wall Of Sound then its not a million miles away.

There’s a lyric in that one too: “the things you’ll find in the great unknown” and this voyage of Ryan and Peaches is replicated in the collection itself, almost as if – along with Rob Lane on the bass and Mickey Richards on drums – they had loads of things they just needed to do this time.

So there’s the glorious “Oh No” – featuring about a million album titles (and “Hard Candy” should be recognised as a classic, so well done, Ryan!) – but as it gets to the last chorus there’s drum beat that kicks in and you understand that this is the work of a band that just loves rock n roll.

“Out Of My League” is built around a keyboard riff from Carol Hodge and harmonies straight out of the 50s, and it revels in luck, while “Lets Go Slow” evokes wide open spaces, sounds from the heartland, and all kinds of Americana. It underlines that this could have been any type of record if the route had gone down different lanes.

“Can I Get An Amen” is another turn. There’s a guitar pattern before the chorus and you can almost hear Noel Gallagher getting jealous, but if there’s a supernova here, champagne or otherwise, it is shooting across the Texan skies.

“Don’t Fall Apart” is one of a couple of ballads, and the use of the backing vocals is hauntingly good, but – and I’ve thought about this a lot because I’ve listened to this record a lot – everything here has to play second fiddle to “Newcastle Charm.” The back story is clear (or it is if you follow Hamilton on Twitter and know where his ex-wife was from) but the chorus is one of the all time best. It is everything that’s great about this record. To turn personal heartbreak into this? How’ay man, stop it now.

The cover here, “Southern Accents” follows his covers EP from earlier in the year, and honours his hero, Tom Petty. His version, built around some gorgeous piano and Lap Steel is simply beautiful too. The Lap Steel is back on the most country of the originals, “We Gave It Hell”, it is – clearly (and I say this with no desire to intrude, its just laid bare) – a song to is ex, and there’s real emotion in the lyrics.

But even here, there’s a stoicism. “It’s not the end, it’s a brand new start” is its last line and that, yet again, is reflected upon the last one, “Pick Yourself Up”. There’s a bit of a Springsteen touch here (think “Factory” off the “Darkness….” Album, “this will not be where the story ends,” he sings. As if reminding himself.

His story, is one of the most thrilling and rewarding of recent years. And, as I said when I reviewed the bands “This Is The Sound” album last year, Ryan Hamilton has a body of work that I consider to be unmatched in recent years. The consistency – the downright brilliance – of it, is such that that last one was a career high, and this surpasses it.

“Nowhere To Go But Everywhere” is a journey that is joyous, glorious and deeply, deeply personal. I began the review by asking what the title meant. I’ll end it by saying the record means the world.