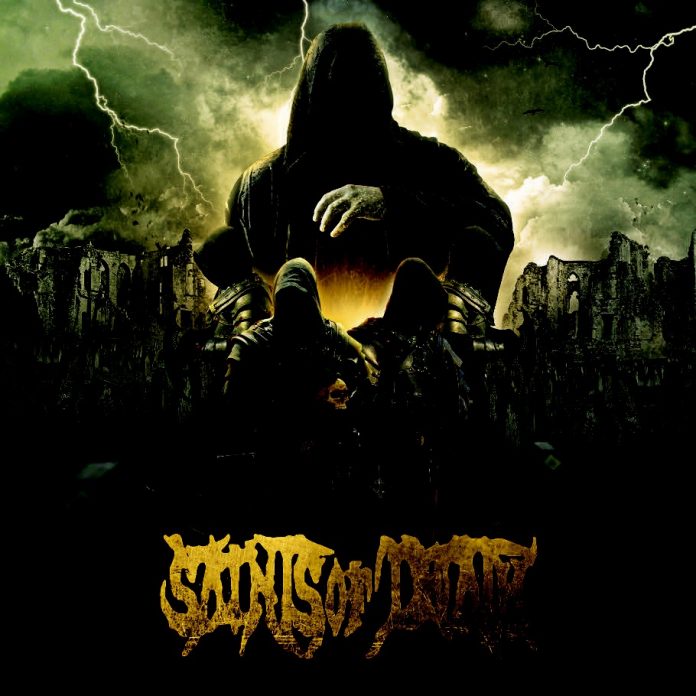 You’ve got a debut EP. You could just sneak the thing out and see what happens.

Not, though if you are Saints Of Death. Frankly with a name like Saints Of Death you’d be a little upset if they stood meekly in the corner looking at their shoes and waiting to be asked a question.

Standing meekly anywhere doesn’t seem to be the modus operandi of these boys though. Throughout, it’s unremittingly heavy and completely unapologetic. It even starts in a mission that suggests it means business.

To call opening track “Army Of The Dead” muscular does it a disservice. It’s musclebound and, moreover it gives the impression that it’d fight anyone who stood in its way (singer and eight string bass man Twan Holliday is a pro wrestler who was once invited to try out for WWE so he’d probably win too).

That said, the second offering of this stunning quintet, “Doom 5.1” is arguably heavier, and if it does it slower that’s only so it can enjoy crushing you more (the band have two bass players for Christ’s sake), and “Blood Vendetta” is a more straight ahead thrasher and is a piece of strangely catchy brilliance.

And actually in amongst all the anger and downright brutality on offer here, these are songs with a serious message. They want to empower the masses who are being oppressed by the machine of governments, banks, religion (take your pick). “Revolution” makes this call explicit and urges action and contains a spoken word passage to make this clear, just in case any confusion remains.

It’s possible to just enjoy these songs on a visceral level, and you best believe there’s much to enthuse about here, but taken in the context of what these songs actually mean, then it’s better still.

Things end with another story. A dying man faces his last moments and concludes that “the person you’ve become is a fucking joke” Saints Of Death – both the EP and the band – are unremitting and unforgiving until the last.

If you can imagine what Pantera might have been like if they had channelled the hostility into a social conscience, or if Lamb Of God had issued their invitation to march on those in power, you will be somewhere close to what is on offer here.

Saints Of Death have come up with the most promising brutal debut in a long time.