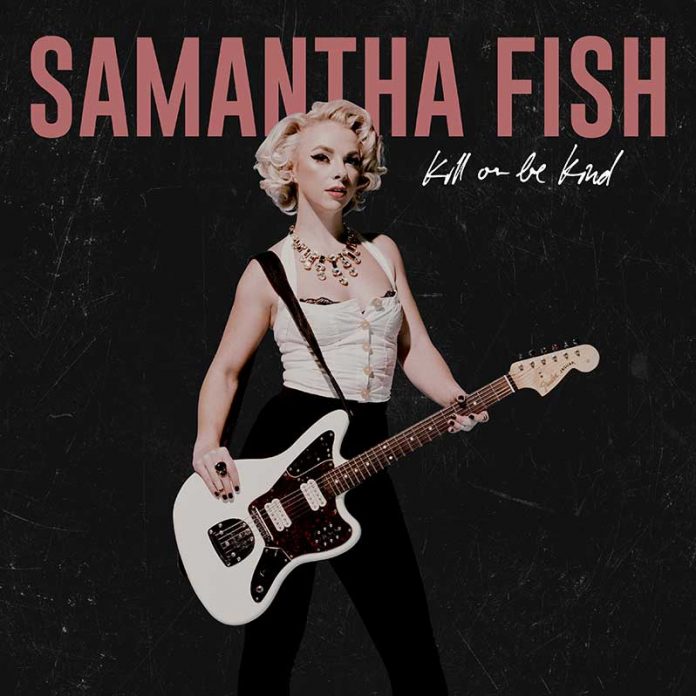 Two years ago – give or take – I reviewed Samantha Fish’s fifth solo record, “Belle Of The West” and was struck by a quote that I’d read in an interview where she’s said she was always looking to push the boundaries.

“You should always get outside of the box. Challenging yourself is how you grow”, she’d  said.

This time, this couple of sentences stuck out. “I think I’ve grown as a performer and as a player. I’ve become more respectful of the melody. You can go up and down the fret board and up and down your vocal register, but that’s not going to be as powerful as conveying a simple melody that people can really connect to and sing themselves.”

In a world where artists are generally “stoked” with their new material, Fish stands out as someone who evidently thinks hard about her work, and on “Kill Or Be Kind” she’s put together a collection that stands as the best of her career.

The brilliant – standout – opener “Bulletproof” (the first single too) and the song “Kill Or Be Kind” are the first two songs here and in less than ten minutes, they provide an neat precis of the whole piece.

The former is as primal as you like, awash with fabulous Cigar Box guitar playing, while the latter is soul-filled, but tellingly begins with the line “back before I was a homewrecker, I was a goody good good girl” as if to underline the chameleon-like nature of the work.

Much of this is infused with sex too. “Love Letters”, to be frank, doesn’t sound like it is all that interested in love at all. More lust.

“Watch It Die” is pretty much a full on hard rocker, but “Try Not To Fall In Love With You” is more nuanced, gentle, and its subtle horn section isn’t the only time that kind of depth is added to the sound, but it might be the best.

When I saw Fish live, I was struck by how good a guitar player she was, and when it all comes together with her fine voice as on the gorgeous “Farewell My Fairweather” she really is up there with the best.

To be honest, she could have been whatever she wanted, and wherever this goes – and “Love Your Lies” is straight from the New Jersey boardwalk and wouldn’t be out of place on a Southside Johnny record – it has a class.

Things veer into country on “Dream Girl” which floats in and out again, and the big old soul stomper of “She Don’t Live Around Here” is possibly the singer telling herself to move on. The organ work on “Dirty” gives that one a real 1960’s feel, and “You Got It Bad” broods rather than races. As if it needs to take it’s time to make a point.

There is just a feeling here that with album number six Samantha Fish is pulling out all the stops. A team of top writers co-write these with her, and it is produced by Scott Billington (with three Grammy’s in his pocket) and mixed by Steve Reynolds (with just the two…..). They might just be getting another.

Because while she wasn’t at any kind of “Make Or Break” point in her career, it does feel that with “Kill Or Be Kind” Samantha Fish has made a definitive statement.