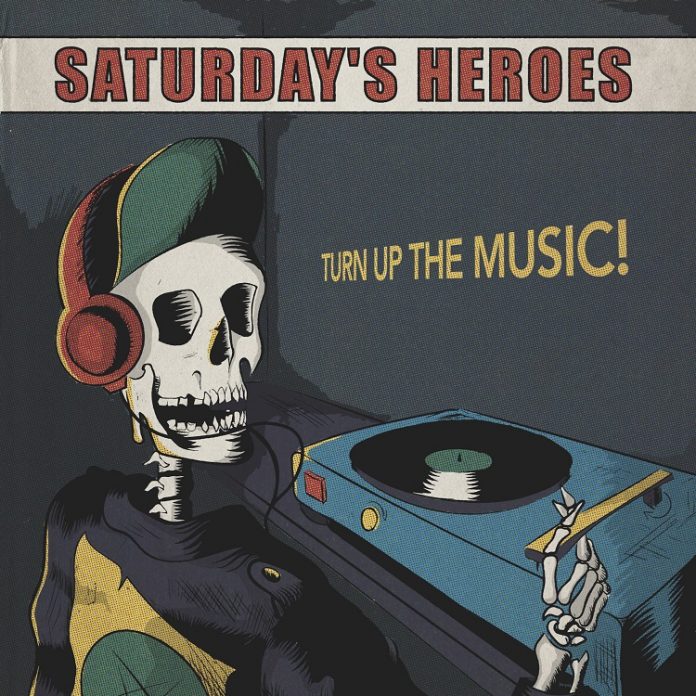 Music like this, is an escape. “I am standing on the West Coast, waiting for my friend” is more than just the first line on the first song on “Turn Up The Music!” It’s a statement. “He’s gonna pick me up, we are going far away” sings Alex Lachan here.

And in doing so he does two things. First, he speaks of his own dreams. But more importantly, I’d contend, he taps into that thing that drives the kids from the small towns the world over to leave their garages and hit the open road with a guitar, their brothers (literal and metaphorical in this case) some songs and a dream.

If that sounds romantic, its because, basically it is. But the words: “tramps like us, baby, we are born to run” are writ right through these seven songs.

The first Saturday’s Heroes album in three years is best described as “punk flavoured” (and you can see how they opened for Dropkick Murphy’s and the likes when they shipped out to Sweden, but for all the Backyard Babies’ elements to the solo of the aforementioned opener “We’re All Done”, this is actually infused with a blue collar, almost singer/songwriter spirit.

Certainly, there’s enough in the fabulous “I Will Be Right There” to have Gaslight Anthem fans dusting off “The ’59 Sound” for sure, but it’s the dreaming in the chorus that hits you again: “the world is yours and so am I” is the hook, but it’s the feeling too. That there is no better time than now.

“Dead Of Night” adds a real nihilistic hint of violence “the maggots are feasting on my face” is a jarring vision, but again, there is a way out, and the guitar rings like a clarion call. Mikael Lachan on drums absolutely thunders his way through “Seven Seas”. Fans of mid 90s Senseless Things type sounds need to navigate to this one immediately, but there’s a real gift for imagery in the words too. This is rock n roll with a poets sensibilities.

And its catchy too. These are proper singalongs. “This Is The End” faces its problems (“I am sleeping in my car, somebody told me I was going to go far”) with gritted teeth and a clenched fist, and “Black Clouds” – built around a metronomic bass from Daniel Wiggander- seems to be searching for a home.

Maybe then, that’s why the last one – the title track – almost brings us full circle. “I was feeling out of place in a body I didn’t like” strikes a mournful note, but solace, hope – salvation even – is found in music.

And that’s why the man in the first track is in all of us. All of us that have a sense of belonging through rock n roll, are in this album. That’s why, although it was conceived in Finspång, Sweden, it’ll make sense everywhere in the world.