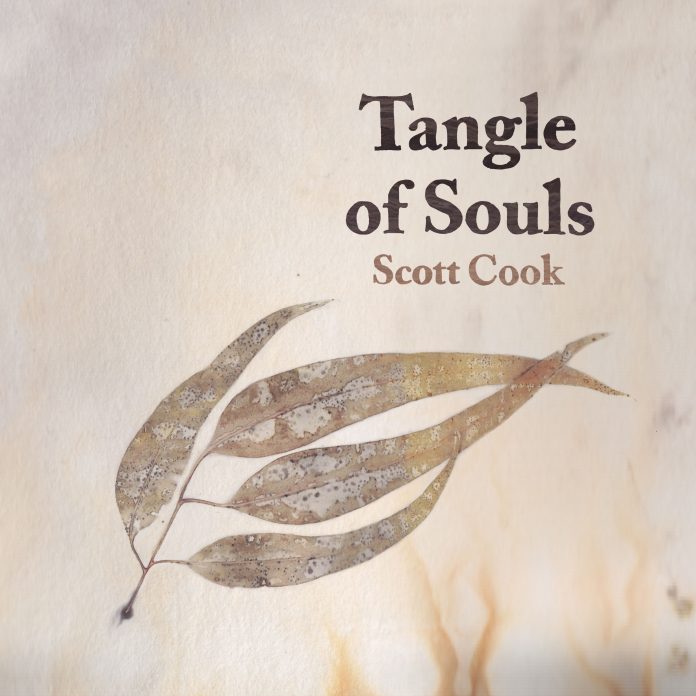 Scott Cook not only is a Canadian folk-Americana troubadour but lives the life as well, having travelled the road continuously since 2007. His seventh album, “Tangle Of Souls” tells the story of a life-changing health crisis and draws parallels to the crises we face as a society seemingly hell-bent on self-destruction. Scott is ably assisted with some seasoned musicians to flesh out this offering in the shape of Bramwell Park (banjo, mandolin, guitar, and harmony vocals), Ester Henderson (fiddle). Liz Frencham (upright bass and harmony vocals), Kat Mear (fiddle) and Pete Fiddler (dobro guitar).

The feelgood `Put Your Good Foot In the Road` kicks us off with almost a country hoedown feel with fiddles flying and a plucked mandolin leading us along this upbeat quite anthemic journey. A song that`s quite possibly autobiographical. A soulful love song follows with `Leave a Light On` and you can hear the vocals imploring for a chance in this quite embryotic romance. There were some wonderful harmonies and finger clicks that added to the hopeful feel of this track.

`Just Enough Empties` relates the tale of a hometown boy whose life has become one of alcohol dependency, the trigger seemingly his best friend`s death in military service and

his struggles to turn his life around. He describes how his hometown has changed, sadly not for the better. The stripped back musical accompaniment and Scott`s delivery, allows you to almost feel the despondency and pain this has caused in the picture he paints. There`s a patriotic heading towards political anthem shared with `Say Can You See Me` with a chorus of “and It`s working people who make this country great, not the greedy opportunists or peddlers of hate, if a new day`s coming, its gotta come from you and me. Oh say, can you see?” I can see people singing along to this in a live setting. The title quite possibly lifted from The American National Anthem `The Star-Spangled Banner` is genius.

`Tulsa` is a stripped back life observation enjoying fiddle, bass, mandolin, and harmonies and reminded me of the sort of narrative tales that Bruce Springsteen was so adapt at. The chorus of “short time running, and a long time gone” will stay with you long after the song finishes. If there was ever a song that clicked with me, it was `What To Keep` a tearjerker based around clearing out clutter and thinking back on your life and reflecting if you have lived up to the ideals you once had. Scott`s vocals and acoustic guitar give a real air of poignancy.

There`s a re-working of Dick Blakeslee’s 1940s activist anthem `Passin` Through` and although having been covered by artists such as Pete Seeger and Leonard Cohen, I must admit I’d never heard it. There was a full sound as it seemed as if all the musicians joined in on this missive. The fast paced `Rollin` To You` was an amusing almost barn dance style offering with a warbling almost yodelling inflection in Scott`s vocal delivery. `Let love Have It`s Way` is quite a curve ball. It begins with plucked guitar strings and vocal but has the bass, mandolin and fiddle join as it progresses relating how tough life has become but still holding onto that ray of hope.

The wonders of information technology allowed me to find and listen to unknown Canadian legend Scotty Dunbar`s `Why Am I Leaving My Home Again? ` which Scott covers. It`s a mid-paced reworking with mandolin, bass, and fiddle, quite countryfied and less downbeat than the original. A story of hitting the road which is probably on of the reasons this wandering minstrel covered it.

Title track `Tangle Of Soul`s` is a rockier piece that is almost a resume of the artist`s life from a childhood of restlessness to actually living that wanderlust. The instrumental `Right To Roam` closes the album and it`s a quite reflective and contemplative contribution to end on.

Scott Cook is not just a singer-songwriter but more of a storyteller in the vain of other champions of the blue-collar working man such as Bruce Springsteen, Steve Earle and John Mellencamp and really deserves a bigger platform to promote his talents. He has the ability to write and deliver a song that not only paints a picture but can almost make you feel you are there. “Tangle Of Souls” is released to a world that is in a period of transition at present but hopefully this crisis will soon abate, and Scott Cook can return to what he does best, being a hard-core troubadour.