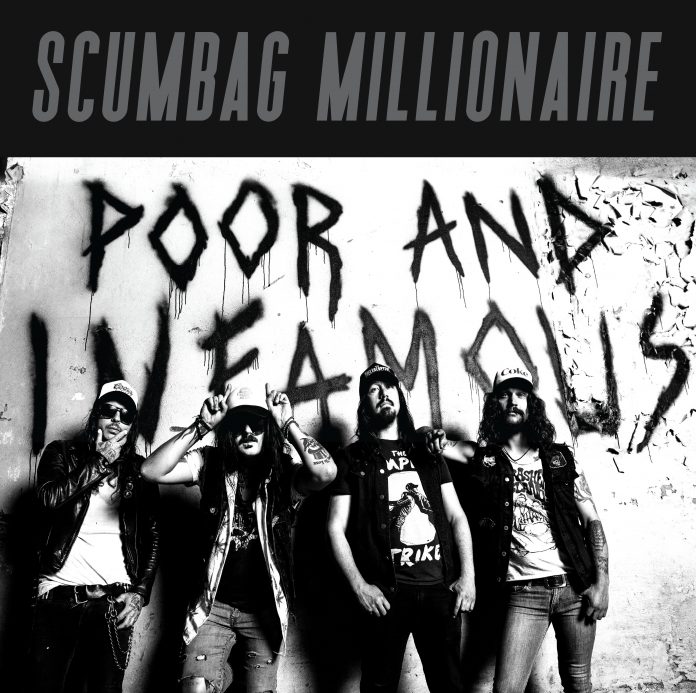 What’s your specialist subject: The music of both The Wildhearts and Swedish Punk N Roll bands between 1994-2000.

Ok, there are many reasons they wouldn’t let me on Mastermind, but if they did, man alive. That above wouldn’t be my first choice (Stoke City’s promotion season of 1992/1993 would be) but it is exactly why I feel like I am qualified to talk about Scumbag Millionaire in such glowing terms – and moreover, why I can say this with some certainty too (and I don’t even care that this is a niche reference that will lose half the audience): you know that bit on “Earth Vs The Wildhearts” where ginger says: “Thanks Mick” and it turns into “Suckerpunch”. The pure unadulterated joy of rock n roll in that moment? That is what Scumbag Millionaire seem to me, to use as a starting point for “Poor And Infamous”.

“Demi God” thunders, it sounds like Motorhead with a real rock n roll harmony, it sounds like “Gotta Get Some Action, Now!” by The Hellacopters , and quite frankly, it is the best opening song on any record this year.

It’s a middle finger to anything that plays it safe, solid, or wants you to turn it down, and that it’s the dirty denim vibe of the 11 songs here too.

There is a real feel of going for broke here, right down to getting Tomas Skogsberg, producer to everyone, to capture the sound. He’s done it, and he’s done it raw. Whether its “Inferno”, the glorious “Ain’t No Doubt”, basically riffs just fly, pianos just go and there’s about a million lead breaks.

Sometimes all at once. But the true genius of this is there is so much noise on this that whilst it shouldn’t work, it shouldn’t have harmony and song, it does, it really does.

“You Had It Coming” has Jennifer Israelsson (Hot Breath) and Elin Larsson (Blues Pills) on it, and both have never sounded filthier. Like they are in the Hells Angels club house instead of their usual environs. It suits them.

“Chasing Dawn” is so fast it makes Zeke look trippy, and in truth, I can chuck in a million references from the more brooding Turbonegro-ish “Put A Price On My Soul” with its hint of violence, to Electric Frankenstein and the tumult of “Desperado” and none of it really matters. Why? Well, the band know it all too. The band have all the same records as me. That’s why it sounds like the most fun anyone’s had in 2020.

The musicianship here, let it be said, is right from the top draw. And these four are masters of it, “Subterranean Twist”, the mid-paced (for this record) “Highway Blues”, or “Trouble City” all prove that – the latter only needs 107 seconds, too.

The best thing about this, is it makes no concessions. It never stops bludgeoning, “Dead Mans Hand” uses a blunt instrument, and if “One For The Road” is a touch less chaotic, then you still wouldn’t want it moving in next door.

This is part way between a sweat soaked gig – one where you just know the band would be selling 7inch singles of every one of these things (it was always about the singles with bands like this, I’ve got millions to prove it) and a biker in a rancid jacket with a patch on the back that says simply; “Scumbag Millionaire”.

If you don’t like Scandinavian rock n roll you won’t “get” this. If you do and long for those days to return, “Poor And Infamous” won’t be far from your album of the year.