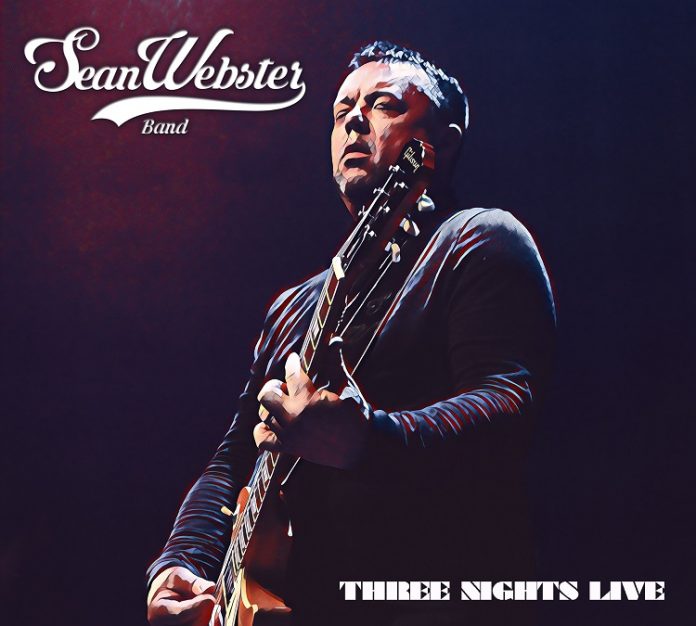 When I was a kid, I only ever cut one class. Genuinely. General Studies. Utterly pointless. Went to the park with my mate (who was on a different lunch to me) and saw my late mother walking the dog. Why she was doing that at that time of day, I never got chance to ask, as she asked me why I wasn’t at school instead. She was pretty angry if I recall.

When you tell lies, it seems to me, you always get caught.

Now, I could, if I was so inclined talk about Sean Webster in the terms of “UK Blues underground hero” and other such clichés.

I could talk about his stellar six album back catalogue. And how it is critically acclaimed and so on. I could, if I wanted to  bang on about all the fabulous gigs he’s played in his over 15 years as a travelling blues man.

The honest truth of this is until this album arrived I’d never heard of Sean Webster. Why this is, given my musical tastes and my genuine love of Blues music, we’ll have to debate at some later point, but when “Three Nights Live” turned up, I assumed it was some new slinger on the block.

If you know this, you know, obviously. But if you are like me and you haven’t a clue about the existence of a man that – on the evidence of this hour anyway – may well be touched by some kind of genius, you’ll want a hook.

To that end think the playing of Alan Nimmo, think deep, long involved blues solos, think soulful, gritty vocals, and think you are missing out massively.

The record starts with a sort of organ drenched, melodic “Give Me The Truth”. It is immediately clear that what we have here is a band. And a band of rare quality. A band that understands its music and is entirely comfortable in their own skin. Floris Poesse’s bass, Hilbrand Bos’ keys and the subtly superb drumming Ruud Gielen (who with a name like that should have had a trial at a mid-ranking Championship football club, surely?) all back Webster superbly here.

Like the opener, “Hands Of Time” was on his 2017 record too, and it is brimming with crossover appeal as it builds and broods in an unashamedly radio friendly way, but in addition to his own –  very obviously wonderful –  songs, Webster is said to be adept at interpretations too. A fact he brilliantly proves on John Mayer’s “Slow Dancing In A Burning Room” which they turn into a ten minute epic, and the darkly brilliant take on Keith Urban’s “Till The Summer Comes Around”, which is a genuine highlight here. Arguably best of an incredible bunch.

“Heart Still Bleeds” wafts in on the summer breeze almost, and if “Hear Me Now” has a more classical blues structure if you like, then it is classily and lovingly done.

One of the reasons for my honesty at the start of this was that there is something about the delivery of it that screams authenticity that I thought I simply had to match. There is a hint of desperation, for example in “Don’t Feel The Same” which anyone has ever had an unrequited love affair will relate to.

It is impressive, though, just how many different styles that Webster manages to hit on. There is a more strident, almost Southern rock thing going on in “The MaYor” and there’s a feeling that hair gets let down on the Rory Gallagher-ish “Highway Man” and that continues on the superb “You Got Know” on which Webster dazzles just because he can.

There is something deeply satisfying about discovering an artist through a live album. I sit here typing this in a Thin Lizzy t-shirt, and my first introduction to them, thirty years or so ago, was just the same. “Three Nights Live” is in the same class as “Live And Dangerous” too, it really is that good.

Now, if you’ll excuse me, there’s a back catalogue I need to listen to.