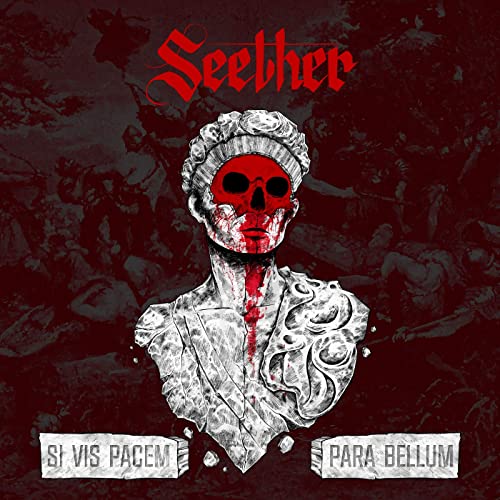 Horrible cliché it might be, but Seether might just be the biggest rock band you’ve never heard of.

A string of awards as long as your arm in their native South Africa, but crucially, the ability to fill venues all around the world.

Yet, they remain, to a large extent, under the radar. And furthermore, I am prepared to bet they rather like it too.

For album number eight, (which translates to “If you want peace, prepare for war”) Shaun Morgan and his troops don’t stray to far from the path. That is to say if you like your rock prepared to shake stadiums, but with the biggest, blackest heart, these are your still your boys.

Pretty much, I’d suggest, your enjoyment of this will be predicated on whether you are a happy person or not. I’ll give you an example. On “Dangerous” – its stand out moment, think something on “In Utero” that might have wanted to actually be a radio friendly unit shifter – there’s a line that, seems to me to sum them up: “we all must subdue and suspend the belief that this gets better.”

After this, Morgan rails against “verified” celebrities (a regular theme of his across their career) and in so doing, probably explains that lack of profile. Here’s a band that is not only not playing the game, they aren’t even interested in it.

Those that get it, get it. Right from the genuine moshpit inducing “Dead And Gone” (and it is a mark of “Si Vis Pacem Para Bellum” that it sounds particularly aggressive) it is clear that the fire that Morgan rediscovered on 2017’s “Poison The Well” still burns deep.

“Bruised And Bloodied” rather like a prize-fighter, bobs and weaves, jabbing here and there before delivering a knock-out blow “it’s really fucking pitiful” shouldn’t be a hook line before a soaring chorus, with Seether it is, it always was.

There’s always a feeling with the four piece that they mean this. That this is a genuine catharsis for them, and so it is on “Wasteland,” basically a ballad, it is 90s sounding thing. One with the same rawness as Stabbing Westward used to make (albeit without the overt industrial sounds).

And they just have a skill for making everything they do sound huge. Corey Lowry’s second guitar helps, and listening to “Liar” and the likes, it strikes me as odd that people were surprised they toured with Nickelback (and as ever, mention of them is meant in a positive way on this site).

The record is roughly split into two columns. That means headbanging groovers like “Can’t Go Wrong (they’ve long been the masters of the opening riff), “Buried In The Sand” which sees drummer John Humphrey and bassist Dale Stewart to the fore, or “Let It Go” (which wouldn’t be out of place on an AIC album, in truth).

But it also means slower, more brooding ones like “Failure” on which Morgan cheerily adds: “I am trying to shed some light on the scars left by the razor” in the most matter of fact way. And it also means the ones that mix the two like “Beg.”

All with the rawest lyrics anyway “Drift Away” is interesting. Ostensibly it’s a ballad, but it offers this: “beauty fades as you get older, it’s such as shame you hate yourself,” but say what you like about Seether and when you strip it all away, they are just a really, really good modern rock band.

Producer Matt Hyde (Deftones and about a million others) has got them sounding like a million dollars, which is about 16,728,960.00 South African Rand. But as “Written In Stone” finishes this off, there’s another big number in view. You can add to the seven million records they’ve sold, because “Si Vis Pacem Para Bellum” is primed and ready to go big.

It’s just a war Seether win on their own terms.