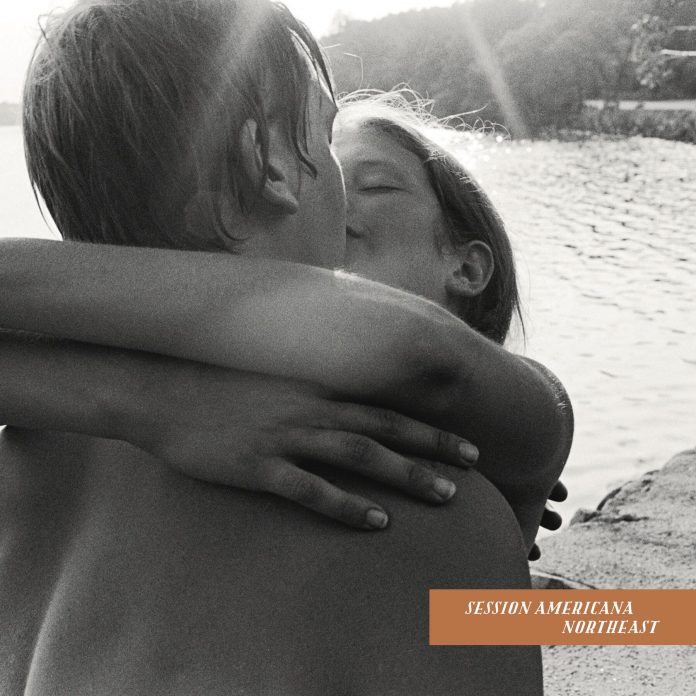 Session Americana is a Boston-based Folk / Rock band / collective. harmonizing on old blues tunes, classic Americana songs, oddball covers, and primarily original numbers written by the group members and their friends. The current line up comprises Dinty Child, Jimmy Fitting, Billy Beard, Ry Cavanaugh and Jon Bistline. Their latest album `North East` is an exploration of popular and folk music from the North Eastern United States as filtered through the many tastes and voices of the Session Americana community. For the project they asked friends and collaborators from their home region to bring in great songs with New England roots, without guidelines as to era or genre.

We are eased into the album with `Riding On A Railroad` and it`s a cover that really echoes the 1971 release from legendary singer-songwriter and Massachusetts`s son James Taylor.

If you close your eyes, you could almost mistake Ry Cavanaugh`s vocals for the original. There are some delightful harmonies from Kris Delmhorst and the song is given some real depth with Duke Levine`s Dobro steel, Jason Anick`s violin splashes and Jimmy Fitting`s Harmonica. Zac Trojano takes the lead on the late New Hampshire Bill Morrissey’s ‘You’ll Never Get to Heaven’ and adds another dimension to this melancholic ode to a place that has fallen on hard times. There is a real feel of the desolation left behind.

When I saw `Here Comes Your Man`, I thought not the Pixies song but yes, the very one. I love the original, so I was pleasantly surprised by this stripped-down version of these Boston stalwart`s classic. Jimmy Fitting`s vocal is ably complemented by Kris Delmhorst`s piano keys and Ry Cavanaugh`s banjo tinkling’s.

`You Go Your Way` is a song penned by Amy Correia who was born in Lakeville. There are some similarities to the original, but it has a very Dr John feel at times, and I have to say Rose Polenzani`s vocals are sublime. I was stunned by Ali McGuirk`s voice on `The Night` penned by alternative rock band Morphine`s late frontman Mark J. Sandman who was born in Newton, MA. It`s a complete contrast to Sandman`s distinctive baritone but my god, her delivery is really heart breaking. It will leave you, emotionally with a lump in your throat.

`Trip Around The Sun` written by Al Anderson, Sharon Vaughn and Stephen Bruton was   recorded by Jimmy Buffet and Martina McBride and charted on the Billboard Hot Country Singles in 2004. Merrie Amsterburg takes the lead and gives us another poignant offering which is really fleshed out with the addition of Duke Levine`s mandola, Isa Burke`s violin and Peter Linton`s electric guitar.

It was as much a surprise to find a Donna Summer cover as to find out that she came from Boston. `Dim All the Lights` was written and was a great success for Summer. It`s obviously very different with John Powhida taking the lead but it still remains such a powerful ballad and   is certainly enhanced with some superb mandolin and harmonica shades. I have to say that I was a big fan of Jonathan Richman, so it was good to see a version of `Roadrunner` Dinty Child leads on this countryfied version with some nice harmonica and banjo throughout and everybody joining in towards the end.

Jennifer Kimball really makes Patty Griffin’s `Goodbye` her own. It`s a slowed down version with some superb steel guitar and understated percussion that allows her to covey the sentiment expressed in the lyrics of this song. A moving story of coming to terms with a loss even after a prolonged period.

I have to admit I’d never heard of Christopher Pappas, frontman of The Everyday Visuals or his song `Driving` but having now heard both I feel blessed. They are pretty close in sound and feel. Jon Bistline`s voice is similar and has that fragile feel that has the right balance for this tune.

Billy Beard takes the lead on the final track `Merrimack County` a song written by Tom Rush and Trevor Veitch. Tom Rush was born in Portsmouth New Hampshire and the song relates to the County which is in its borders. It has a real, what I’d call Steve Earle feel to it.

This is a perfect introduction to this band and also introduced me to songs that I’d forgotten or that were on the edge of my radar. The core of the group are multi instrumentalists and have encouraged some gifted musician friends to guest on this wonderful offering. This album is a great place to start before exploring their back catalogue.