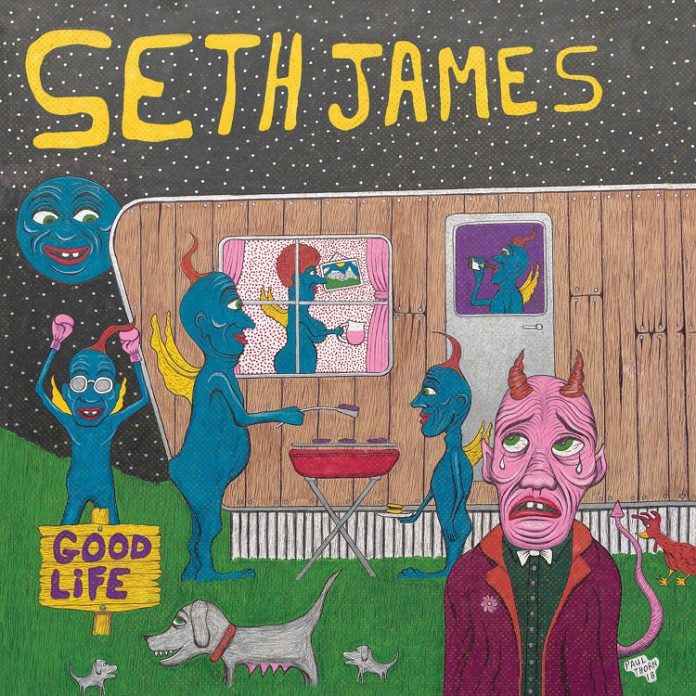 “Good Life” might just be the most apt album title of the year.

There are 12 songs here, on Seth James’ fourth solo record, and they are absolutely welded together by what seems to be a genuine contentment.

On the info that came with the record, there are two sentences that – in my humble opinion – are the key to why this might be: “I never made the decision to be a musician,” James insists. “I just started doing what I loved, and it got out of hand.  I’ve been doing it ever since.”

If, as Springsteen observed, it is a sad man, my friend, who’s living in his own skin and can’t stand the company, then the reverse is also true.

Happy is the chap who does what he wants to do, and Seth James is that fella.

Also on the email I got sent with this, were the words “Texas guitar slinger” now, not being familiar with James’ work previously, it conjured images of ZZ Top, or at the very least the Rev. Billy anyway, and it came as something of a shock when I heard “Brother” the fabulous opening track here. Horn drenched doesn’t do this justice. Like a cross between the modern work that Bonamassa has done, and a second line in some New Orleans juke joint, it is fabulous – and magnificently played.

Somewhere, someone cleverer than me has a name for the type of sound this creates. Equal parts blues, soul, jazz and Americana from the heartland. Me? I just prefer to glory in the outright catchiness of the down-home wholesomeness of “That’s How You Do It.” “Nothing worth having ever happens overnight” offers James here, and you could reflect on that or just enjoy the brilliant lead guitar.

The title track has a touch of “Son Of A Preacher Man” about it, and the organ adds to the mix. The sentiment is just fine too. The organ is back on the timeless “Little Angel” and the suggestion that this record is one that could have come out at any point in rock n roll history is all over the mighty “It Ain’t What You Eat, It’s The Way That You Chew It”.

Indeed, for all the talk of “guitar slinger” and the rest, this is a record that James seems content to play in the shadows almost, as if realising the song is important and letting the band do the heavy lifting. Saying that, James is clearly a brilliant guitarist, though, and the reflective “From Way Behind” proves that, with a real laid-back feel.

Producer Kevin McKendree (Little Richard, Etta James) harnesses all this together, and “The Time I Love You The Most” in particular sees the band switch gear. It is a feature of the record that for every toe-tapper there’s a slow one that stirs the emotions in a totally different way. “I’m Coming Home” has classy backing vocals and recalls Otis Redding, the bass-filled “Get Outside” is funkier, and if it doesn’t really menace then it broods.

“Medicine Man” is as Texan as it gets, and its homespun wisdom includes the words “all you Nicky Dicky’s better fall in line” that will weld its way into your head (even if you haven’t a clue what it means).

“Third Generation” is not only one of the most “bluesy” as it were, it also appears to be the most personal, and settles a few scores too, and the record finishes with a slice of “front porch” classic sounding acoustic blues. “I Am The Storm” has a bit of Kelly Joe Phelps about it, and it is a glimpse in to what the album could have been if it hadn’t been celebratory.

Even if it had been darker, the suspicion is that it would have still been marvellous, but so good is “Good Life” that you can only be glad that they went down the route they did, and Seth James in not deciding to be a musician, and playing because he could, has made worse choices.