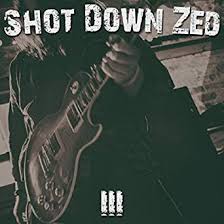 When a venue Tweets this:  “Does anyone know a decent classic rock support band for Sunday’s gig?” It’s all a good laugh, until you realise you are going.

All of which meant that I went out of the house the other Sunday in the freezing cold not expecting much from Shot Down Zed.

At the end of the review of the show I said this: “it might be that Shot Down Zed are a band you see a lot more of in 2020.” That is true, too, but they’ve had a pretty busy 2019 to be fair. “III” is the….urmm…third EP they’ve stuck out this year, and it is four songs that deserve to be heard.

The first 30 seconds of the opening one of them, by and large, dictate whether you are going to like them or not. Massive, swampy grooves, and – I say this not to burden them with any weight of expectation, but solely to give a handle on it – riffing that will appeal to people that like Clutch and Orange Goblin.

The trump cards, though are the fact Lewis Concannon rips a solo out of nowhere and when Steve Birkett Jr sings “fear me, like you fear God” then it sounds a lot scarier than he looks.

“Death Stare Death Rattle”, another they played the other day, does the light and airy verse and crushing chorus thing that reminds of Corrosion Of Conformity, and whilst I’ve no idea what the lyrics are about, then kudos still for the line: “we all know sex sells, and I am buying if the truth be told…”

“Good To Be Bad” (which was helpfully prefaced with the suggestion that, “well it is…..” on stage” is the most blues flavoured, but it is utterly filthy, and Birkett Jnr finds something of a roar here.

“Badlands” isn’t a Springsteen cover, unfortunately, but it has the same vintage sound that you can kind of imagine coming from the home studio of The Picturebooks, if they were jamming with The Answer over a beer or two. However, that is before some Faith No More type bass comes almost out of nowhere, by way of a surprise.

Look at the bands I’ve mentioned here. Clutch, Goblin, Picturebooks, CoC. Some of my very favourites. The mentions haven’t just come out of thin air either, and neither do SDZ sound like a copy of any of them.

Instead, what they are is one of the most promising bands I’ve heard in a while. “III” is that good. If nothing else, it proves why you should always get down for the support – even if they weren’t meant to be.