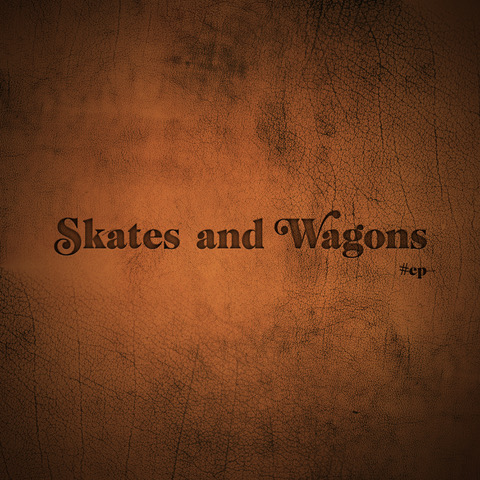 There are certain phrases designed, surely, to scare unsuspecting people.

“Gentle comedy”, that’s one. “A sideways look”, that’s another. “And now on BBC one, a party political broadcast from the Conservative Party”, that’s just upsetting.

Then there’s this one: “….but arrives with a healthy dose of unconventionality.” Was eight words that I assumed would mean I wouldn’t be reviewing Skates And Wagons.

See, “but arrives with a healthy dose of unconventionality.” Evokes a couple of things to me, not least of which is the idea that a band is rather amusing itself than entertaining us. However, as we all know, “Andy Knows Nothing” is a regular feature on this website, and thus “EP” rather proves that again.

For one thing, there’s two of them, and I love a two piece band. But,  Adrian Dacre (Drums) and Carlton Taylor (Vocals, Guitars, Keyboards, Percussion) aren’t quite the raw, primal thing that most duo’s are.

In fact, across these four songs, stretching out twenty odd minutes, I am not sure what they are. Certainly, “Just Because You Can (Doesn’t Mean You Should)” has a bit of a Small Faces jamming with The Who thing going on.

But, well, as if to prove that just because you can doesn’t mean you shouldn’t as it were, “Spin My Wheels” is a proper sixties freak out. Organs wash, there’s a moog (I think) and its as batshit as Turbowolf, but, like the Bristolians (another “unconventional” band that I love, in fairness) S & W get hooks. This one is as catchy as anything Noel Gallagher would have done in his pomp.

However, don’t bother thinking you’ve got it sussed. You haven’t. “Tender (Is The Night)” is mellow, and as relaxed as a bloke in a hammock with no work tomorrow. Sun-kissed and warm, it belongs to the Laurel Canyon blue skies and not the drizzle of a West Midlands December,

The last one “Law As I Aim True” is as 60s as it gets. There’s Moody Blues songs that my parents used to play that crackle like this, but that’s before the expansive chorus suckers you in, again.

So, what’s next? No one knows. That’s more literal than normal in this case, given that work began on “EP” 10 (that’s TEN) years ago. Still, some things are worth the wait, so I’ll see them again in 2030, I suppose.