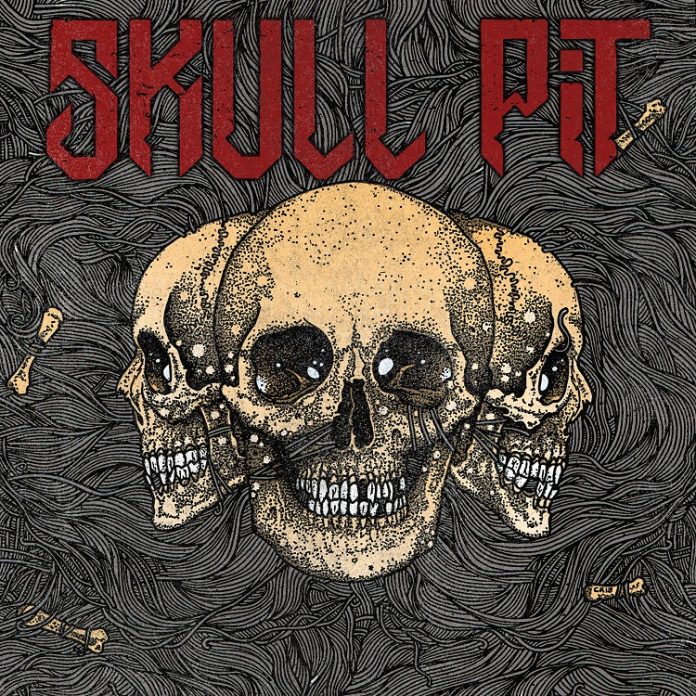 Skull Pit: the most metal band name anywhere in 2018? I am saying yes.

That feeling is only reinforced by the first line on the first track here: “double down on the Devil’s kiss” goes the vocal on “Double Cross” over the filthiest, fastest riffing anywhere since Lemmy left us.

Skull Pit, for all that they sound like Motorhead jamming on some Saxon riffs in 1982, are a very modern story. They are what happens when founding member of Exumer , Mem V. Stein, and Church of Misery’s, Tatsu Mikami , corresponded for some years online due to their mutual love and respect for each other’s band – which to be fair to them is probably what I should have been using the internet for in the late 1990s instead of…..playing Championship Manager at 2am, honest mum.

They deserve credit too, for not sounding anything like Exumer or Church of Misery. This is a genuine departure and more than that it is half an hour of the finest greased up fury you will ever hear.

“Roller” is so fast, even the likes of Zeke are jealous, and by the end of its 2 minutes and 44 seconds if you haven’t found your latest crush, then stop reading. Because the rest sound just the same.

That is to say, this is beer soaked, moshpit happy and absolutely nefarious. “Fire Breather” is what all rock n roll should be, but you can only do if you are playing with the big boys. All the kids with the nice hair and the lyrics written by a focus group need not apply. You wouldn’t understand.

The rest of us, whether they are cynical, beardy blokes in their 40s, or just bored with modernity, we’ll just get on with loving this, shall we? “Year Of The Dog” is blues, but not as you know it. “This world is coming to an end,” sings Stein. “And I am allllll in” as if he’s daring the apocalypse to take him on. “Soul Raiders” is so metal it starts with a drum solo, and “Blood Titan” is so groove filled that it sounds like it was only designed to lay waste to the human race.

“Marauders” may well be a Motorhead song. Simple as that. Like being punched in the face repeatedly it crushes like nothing else. “The Line” passes for a ballad around here – in that it only does things at 99 mph – and Stein positively spits the lyrics, before “Wolf Spirit” thunders in like some blitzkrieg attack. It is a feature of this record, for all the speed and the bluster, features songs of the most catchy variety and the hooks here are deceptively brilliant.

There are nine songs here – largely I suspect because the classic NWOBHM albums all had 9 cuts on it seemed – but everyone here was evidently having so much fun they decided to make it a round ten, and added a cover of “All The Lessons” from Rose Tattoo, for which they draft in ex- Madball man Brian “Mitts” Daniels, and if ever there was a man who was made to sing a song with the line “fight violence with violence, it’s the only way to win,” its him. And it probably comes as no surprise either that he produced Stein’s vocal tracks.

If I believed in such things I’d say Mr. Kilminster was sipping a JD and Coke in approval at all this but I don’t so instead, I’ll just say this: Rock n roll is never going to die as long as men are infused with this spirit – his spirit – and moreover, there is a very real possibility that “Skull Pit” – the band with the most metal name – is also one of the records of the year.