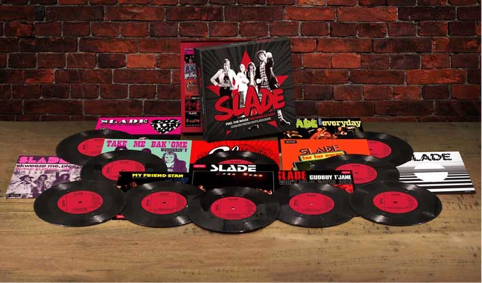 Slade first hit the road in 1966 as the ‘N Betweens before changing their name to Ambrose Slade then Slade. They have a strictly limited-edition box set comprising ten rare internationally released 7’’ singles, including an extremely rare 7’’ promo copy.

The set also includes 1981’s Night Starvation, not previously commercially released as a 7”.

I have to hold my hands up and say I was a big Slade fan. At school in the seventies I had all the badges issued with the misspelt song titles. God how I wished I still had them. So, I was familiar with most of their chart hits, went to see their film `Slade in Flame` and finally got to see them in 1982 just before the original quartet called it a day.

`Coz I Luv You` released in 1971 was the bands first number one single and remained in the charts for fifteen weeks. Lea suggested that he and Holder write a song which had a Django Reinhardt / Stephan Grappelli “Hot Club” influence The pair wrote the song in half an hour and began the successful song writing partnership of Holder/Lea, which would go on to write the bulk of Slade’s material. Holder then suggested spelling the title to reflect their Black County dialect. The title then became “Coz I Luv You”, which marked the beginning of Slade’s misspelling trademark. The electric violin is still a wonderful addition to this song listening today. The flip side `My Life Is Natural` is a mid-tempo quite acoustic rocker and shows a little of the depth that this group was capable of. `Take Me Bak ‘Ome was another Holder/Lea composition released in May 1972, their second number one. Dave Hill described the song as a “live, earth-dirt song”.  What else can be said apart from it`s riff based, powerful and rocking. The b side ` Wonderin’ Y` is a slower more Introspective tune which was also on the Slayed? Album.

`Mama Weer All Crazee Now` spent ten weeks at number one and what a loud raucous but catchy release it was. American heavy metal band Quiet Riot also covered it and stuck it in the charts in 1984. The flip side `Man Who Speeks Evil` is a real rock out of a tune, quite underrated. `Gudbuy T’Jane` came out in November 1972, another release off the Slayed? album. It was kept from the top by Chuck Berry`s `My Ding A Ling` it` a great song with a driving bassline such a powerful rock offering. The other side was `I Won’t Let It ‘appen Agen` with its churning bass guitar. thumping drums and Noddy`s screaming vocals a la AC/DC. Wonderful.

September 1973 brought the band`s fifth number one with the wonderfully titled `Skweeze Me, Pleeze Me` Another sing a long track that stayed around the top for ten weeks. The b side was `Kill ’em At The Hot Club Tonite` a jazzy Django style cut. `My Friend Stan` was the first release following drummer Don Powell`s near fatal road crash in July 1973. Understandably its quite subdued compared to previous releases and very piano driven but still reached number two. The other side `My Town` is a good old-fashioned slammer with a catchy sing a long chorus. It makes the best of Noddy`s gruff vocal range.

`Everyday` was a real risk for the band, being a piano-led ballad, an unusual style for Slade but the song reached number three. The b side of `Good Time Gals` is quite a bluesy number with some near the knuckle `nudge, nudge, wink, wink` lyrics that are very much based around what was acceptable in the early seventies.

`Far Far Away` was released in October 1974 and reached number two in the UK. The song originated with Holder. While on tour in America, he came up with the opening line while sitting on a balcony overlooking the Mississippi river in Memphis. Holder and Powell have both stated that this was a favourite track of theirs and I have to say it`s one I really like as it shows a more melodious aspect to Noddy`s vocal array. The flip side `O.K. Yesterday Was Yesterday` is a real rock out track but again the lyrics are of their time.

They were both on a six track ep released when the hits had dried up and just as the band went down a storm as a late replacement at the Reading Festival, which breathed new life into the band, The former is a typical Slade stomper but with lyrics a bit too unsubtle in this day and age. The latter a rowdy thumper.

I have to say that this was a cracking assemblage of singles and made me reacquaint myself with a much-cherished band from my formative years. There are no fillers in this collection. Everyone`s a home run. Holder, Lea. Hill and Powell collectively Slade, were and still are a really underappreciated band who were proud of their Working-class Black Country Roots. Maybe this release will go some way to rectifying this.