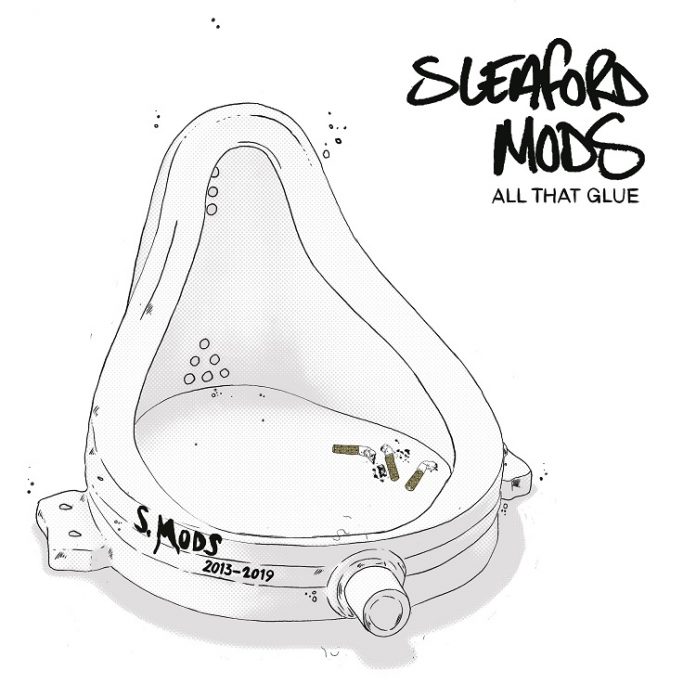 I’ll save you some time.

You are either going to love this verse and think the man who wrote it should be the new Poet Laureate (probably not the children’s one, in fairness) or you are going to hate it.

“So Mr. Williamson, what have you done in order to find gainful employment since your last signing on date? Fuck all. I’ve been sat around the house wanking. And I want to know why you don’t serve coffee here. My signing on time is supposed to be ten past eleven. It’s now twelve o’clock. And some of you smelly bastards need executing.”

This is from “Jobseeker” one of the rare singles that is finally collected here. And nothing describes Sleaford Mods better than that.

Assuming you are still with us – hi, you are a person of impeccable taste – here’s another line. “Music for the masses, I am outclassed here, mate”. That’s from “McFlurry’s” which attacks the tasteless, the mass produced, the bland. It is the first line on “….Glue” too.

When Jason Williamson said those words back in 2013, I don’t know if he knew that six years later, Sleaford Mods would celebrate their first top ten album, and their biggest ever UK tour. I saw them twice last spring on that run, and Messrs Williamson and Fearns were in astonishing form.

Fast forward a year, and we have “All That Glue” a ragbag kind of collection made up of some “Best Of” stuff (perhaps to enlighten the people that caught on after “Eton Alive” last year, some rare singles, and a load of unreleased stuff for the fans and collectors.

Whichever one of those you are, then assuming you want to listen to the best lyrics that shine a light on the working class, then “All The Glue” has so much to offer.

2013’s “Austerity Dogs” is mined again for the brilliant “Fizzy”. “Well just to keep the job. Just to keep fuck all from turning into a fuckin’ nothin’ blob” is the line that everyone who works in a job where they feel undervalued will get.

“Rich List” – and oddly I am writing this on the day that the headlines screamed from the papers that “Billionaires Had Lost Millions in lockdown” like I am supposed to give a fuck –  is wonderfully nihilistic and, if that’s not enough, the “Jolly Fucker” destroys racism in this sentence. “EDL twat. Tommy used to work on the dock. Union went all white. He fuckin’ loved it.”

“Routine Dean” pulses like a rave – and in amongst all the discussion about the words that Williamson puts together, it does need to be said that Andrew Fearns always manages to find some perfect accompaniment to it, like he does on “Tied Up In Nottz” that they played live last year, and “Tweet Tweet Tweet” that was in the set too.

Of the unreleased songs “Blog Maggot” is brilliantly furious, and “Rochester” – well let’s just say the tourist information people of Medway won’t be using it to entice people down to Kent – and the line: “He’s the emperor of fuck all, man, like Matthews Turkey Roasts” is one of the more original put downs I’ve ever heard.

“TCR” – another that they regularly play – actually has a tune, a sort of post-punk thing – and it is noticeable that some of the ones at the end of this, the more up to date ones, like “BHS” have just a little more nuance and seem less….harsh for want of a better word.

That’s certainly true of the last two. The ones off “…..Alive”. “OBCT” (“you are getting salty, you ain’t a fish”) and particularly “When You Come Up To Me” – in which Williamson actually sings, and gives the track an entirely different vibe than anything else on the album. Whether that signifies what is going to happen in the future, who knows, what you can be sure of is that this retrospective of the last ten years, shows arguably the most original punk (and I really think they are a punk group) band in Britain today.