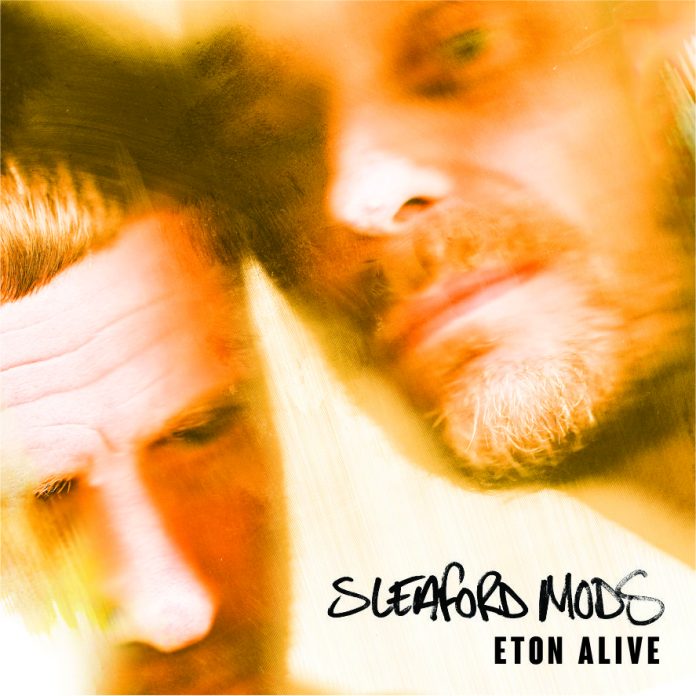 I had to Google the date, but I found out that it was on September 29th 2015, I went to watch Gun play a gig at the Institute in Birmingham. The Scot rockers are my usual comfort zone, classic rock, a band I remember from when I was a kid and can knock 500 words out on at the drop of a hat – I am even happy to pretend I don’t like their cover of “Word Up” if you like.

That night as we were going in, it was obvious that there was another gig taking place at the venue, so I asked my mate who was playing. “Sleaford Mods,” he said. “two piece from Nottingham way, you’d hate them, keyboards. Political, really interesting.”

The bloke I was with is the one I go to most gigs with, so when he says “you’d hate them” I usually steer clear. Except, this time I didn’t. Political music, you see, that’s always been something that’s interested me. Something that wanted more than to say “maybe, baby” and actually had something to talk about.

And there’s something about the use of language that has always thrilled and enthralled me. To that end, here’s a quote from Sleaford Mods vocalist Jason Williamson on “Eton Alive”.  “Eton Alive speaks for itself really. Here we are once again in the middle of another elitist plan being digested slowly as we wait to be turned into faeces once more. Some already are, some are dead and the rest of us erode in the belly of prehistoric ideology which depending on our abilities and willingness, assigns to each of us varying levels of comfort that range from horrible to reasonably acceptable, based on contribution. So after the digestive system of the Nobles rejects our inedible bones we exit the Arse of Rule, we fall into the toilet again and at the mercy of whatever policies are holding order in the shit pipe of this tatty civilisation. It is here our flesh regenerates as we rattle into another form, ready, and ripe for order”.

So yeah, we’ve established, then that there’s an anger  – no make that a seething rage – about these 12 tracks.

But it’s the way they deliver these that makes them so very, very interesting. “Into The Payzone” lays waste to consumerism over a hypnotic beat, and “Kebab Spiders” crushes celebrity culture over something approaching a rave. “Who knew,” spits Williamson “they got the experts in…..”

The thing is that you only need to put the news on to see the is country is going to shit. Do you think that those who are working three jobs and still ending up at a foodbank give a toss about treacherous Chuka and his centrist politics? No. Sleaford Mods give these people on the sink estates a voice. “I’ve got two brown bins, I should only have one, but what the council don’t know won’t hurt them” offers a phenomenal line on “Policy Cream” but frankly everywhere you look there’s some kind of genius poetry at work.

John Cooper Clarke would be proud of some of this, so much so that even the most accessible things here like “OBCT” drip with glorious imagery, as Andrew Fearn manages to lay some sort of electro bedrock over each one.

“When You Come Up” sees Williamson almost singing, and it adds a new dynamic, while “Top It Up” is stark, uncompromising and jarring. It’s supposed to be. So is life.

“Flipside” recalls another Nottingham band who did things out of left field, Pitchshifter, and honestly, is it too much of a stretch to call this electro-punk? Think of that while you glory in the line that is: “Graham Coxon, looks like a left-wing Boris Johnson.” Nobel prizes have been given out for less.

“Subtraction” is a couple of minutes of fury that will have you reaching for your early Prodigy records, while “Firewall” is genuinely catchy -and as brilliant as this album is, it isn’t catchy often. All those nights listening to John Peel on the portable radio my gran brought for me, pretending I understood the music as a ten-year-old come flooding back here.

Amongst all this, the crown jewel, to be fair, is “Big Burt”, which, attacks the music media, but only after this: “you snap on tools, who never grow, shelling out £1500 to see a has-been, who can’t even do three gigs in one go…..” The message here is clear. Forget the “classic”. There needs to be a revolution – the symbolism of the way this review started is not lost on me.

“Eton Alive”, though, essentially recognises the futility of all this too. Nihilism abounds “Discourse Dif” is clear: “we never touch the real feeling, just the empty discourse” and isn’t that right? When you think about it? And if you aren’t thinking about it, then Sleaford Mods aren’t for you.

“Negative Script” (key line “I don’t want an awakening, I don’t believe in fun….”) ensures that things don’t have a happy ending, but then what does? Really?

Sleaford Mods aren’t making music for the masses  – at least in any conventional sense anyway. They are making the music they need to make and putting the frustration of millions at the forefront of it all.

Original and bold. Sleaford Mods are probably the reason you should always make you own mind up. They wouldn’t want it any other way.