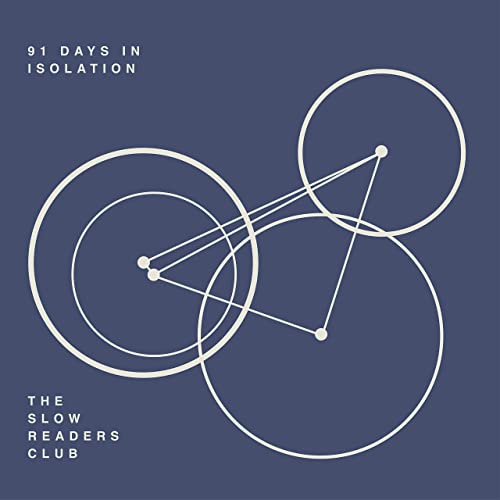 It’s tough not to be philosophical when reviewing this album to be honest.

“91 Days In Isolation” came out last year, but we’ve had two more lockdowns since. The last one wasn’t too bad as we had a day to get out of it, this one carries with it all the uncertainty of the one last summer, without the good weather.

There are other things too, like on March 7th this year it’ll be a year since I’ve saw my beloved football team play, a week after will mark 12 months since a gig. Especially pertinent here, because it was a festival – remember them? – where I saw Slow Readers Club for the first time and became transfixed by their brand of dark, intoxicating indie that I didn’t have a clue I liked until that afternoon in Nottingham.

And there’s a wonderful line in the opening track here, “Barricades” that almost exemplifies how little the world – we – have moved on. “Scared of the state,” sings Aaron Starkie. “George understands, that he controls past writes the future”

Orwell wrote that in 1949. The more things change, the more they stay the same.

Not though, for SRC. They seem in a perpetual state of creativity at the moment, studio album number five might have been the product of necessity (and probably restlessness) but there’s something so special and beguiling about the epic soundcapes they create, whether it’s the sweeping “Everything I Own”, or the maelstrom of near confusion from which the superb “Yet Again” emerges.

This is very much a Slow Readers Club evolution, rather than a revolution, though. “Last Summer” pushes the boundaries a little and floats by in gentle fashion (with a falsetto delivery too) but the 80s, post-punk flavour of “The Greatest Escape” hits the absolute sweet spot.

As ever, there’s a suspicion with SRC that they could fit in anywhere. The keyboard driven “Wanted Much More” is happy in the dark recesses of a club doing whatever it wants in the shadows, but they immediately contrast this with a real stomping rocker “Two Minutes Hate”.

It’s this comfort in their own skin that leads them to the beautiful, fragile “Like I Wanted To”, which then explodes almost. Frankly, you don’t make a record like this if you feel under pressure.

If you only had one word to sum this up it would “freedom.” That’s why “91 Days In Isolation” is so good, a record that they just almost had to make. Maybe Vol 2 is due at the end of this current forced incarceration?