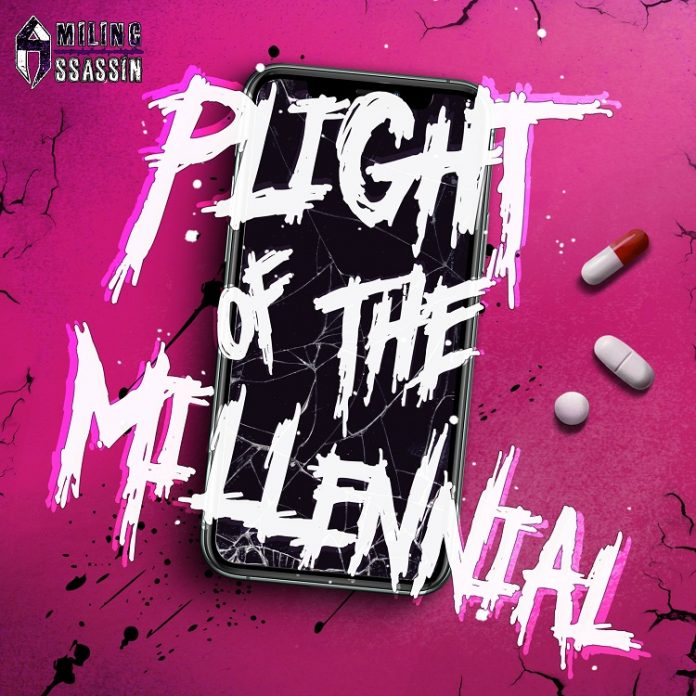 I had to look this up to be fair, but according to the Internet (which is never wrong, as we all know, right?) but being born in 1975 makes me either Generation X (which would be an ace name for a punk band) or – because there’s a crossover, one of an Xennials.

If we can’t be sure on that, then we do know that I am not a Millennial, so perhaps don’t understand the nihilistic angst here, but then neither am I a “Boomer”, so I avoid the worst of the scorn here: “We’ve had enough of being called “Snowflakes” by boomers, who get offended by vegan sausage-rolls and burkas,” screams George Garnett in the “Prologue” that starts “Plight Of The Millennial”.

“Polemic” might be a better word for it, George screams most things, in fairness.

Now, you’d be forgiven for reading the words “Prologue” and assuming this might be prog rock. You’d be very, very wrong. Instead, this is nine “songs” (and given that “Aftermath” is 90 seconds of someone shooting a gun into a crowd of people and them screaming I use the word “song” in the loosest sense) of the most vicious, nasty, politically aware Hardcore you have heard.

The title track is eight seconds of someone yelling “fuck” – as if they’ve unleashed their inner Napalm Death – and whilst it adds to the vibe, the more filled out tunes, like “Psycho-apathy” are interesting: “I don’t set goals cos I don’t care if I reach them.” Is a first line that does not just apply to Millennials, trust me, and the quickfire rhythms and discordant guitar bring to mind a sort of punk Therapy? in parts (as opposed to punk therapy, which also applies) “Divide And Conquer” is probably the best. “Class war! Class war! Let’s have a class war! What the fuck even is middle class? Convinced yourself you’re not “common folk”” is another in a long line of brilliant opening lines this EP has.

“Coping” manages to deal with depression head on – as Smiling Assassin tend to – and “News Corp Monopoly” reiterates why you should never buy The Sun: “Publishing slander and gossip, disguising them as facts. “Holed up in the U.S.A avoiding UK tax. News corp. monopoly controlling all you see and hear. Twisting your agenda by in sighting hate and fear.” And the even better “National Pride” explains neatly what I’ve always believed to be the case, namely that why I should I be proud of anything I don’t control. Ask your precious country if it gives a shit about you! Think you’re special just because you were born on different soil.”

Which actually is my only problem with this. This isn’t about the “Plight Of The Millennial” at all. It’s about the plight of us. There’s no point in making this generational. I’ll give you an example.

I don’t believe that Boris Johnson had Covid-19. I believe it to be a story he and Cummings concocted to keep him out of the firing line, because of the deaths he’d caused (it may just have been that Tubby had another book to write) and tweeted the theory. I am 44 years old. I got involved in a spat on Twitter over it, and got a 12 hour ban for something I said. The very next day my brother – seven years younger than me – text me and said this: “Ooops, Twitter naughty step, apparently you can’t call Tories c**t’s”. And our dad, who I live with, put a film on the other night and it said: “the following has been declared unsuitable for anyone under 18. It contains scenes of violence, or of a sexual nature and strong language throughout”. My dad, 72 years old and a “boomer” in this respect, turns to me and says: “lovely, a full house then.”

This struggle isn’t generational, its about right and wrong. And if you are on the correct side, then this is for you. In the wake of the terrible scenes in Minneapolis this week, Martin Luther King’s son Tweeted this: “As my father explained during his lifetime, a riot is the language of the unheard.” This, is their music. Whatever age they are.