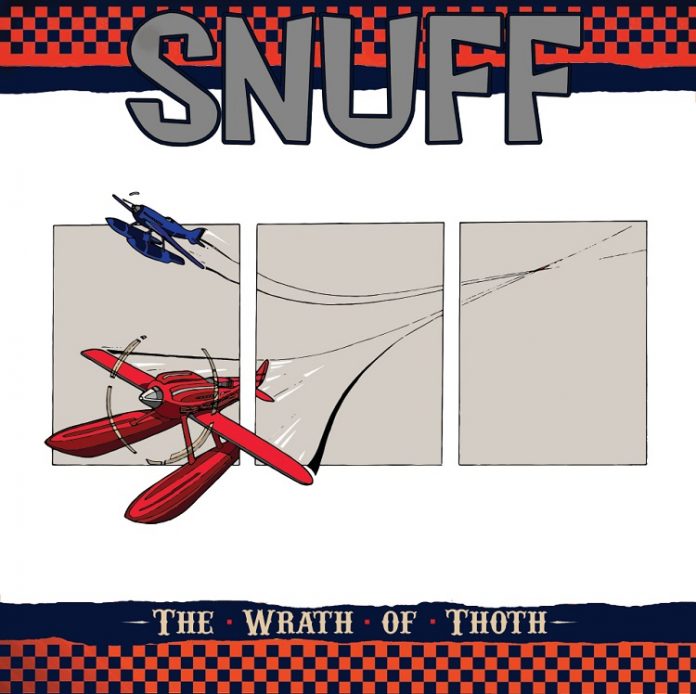 I use Wikipedia a lot- in fact, I use Wiki so much, the keep emailing me asking me for donations (I am also banned from contributing, for something I did in the course of my day job which one of their little elves called: “the most flagrant abuse of Wikipedia I’ve ever seen in all my years of moderation” – that is genuinely true and another story for another review).

The best thing about Wiki, though is the absolute factual and totally dry why they present things. Take this, for example: “Snuff are a British punk rock band formed in Hendon in 1986.” They are, it’s true.

It then goes on: “The original line-up was Duncan Redmonds on drums and vocals, Simon Wells on guitar and vocals and Andy Crighton on bass, with Dave Redmonds being added to the line-up on trombone before the release of Flibbiddydibbiddydob.” And it says nothing else on it. Like “crikey,  that’s the best title for a single ever” or some such (but then, I suppose, we are dealing with a band who released an album “Commonly referred to” as “Snuff Said” but was actually called “”Snuffsaidbutgorblimeyguvstonemeifhedidn’tthrowawobbler chachachachachachachachachachachayou’regoinghomeinacosmicambience”, I suppose.)

Snuff have a long and involved history. Read it here, if you like (it is probably the best written press release I’ve ever been given on the site) but this is about the future. Or at least the present, because what we have here is six tracks of the highest order.

It is tempting to see everything at the moment through the prism of coronavirus of course, but Christ, listen to the opener of “Drink Freely From The Chalice Of Lunacy” and tell me that’s not what we are doing right now. I saw a tweet this morning of a VE Day party, with people doing a socially distanced dance, and some kid had commented: “I couldn’t even go to my nan’s funeral last week and these prick’s are doing a conga”. It needs this as a soundtrack. The riff suggests Ginger from the Wildhearts might be a fan, and Duncan sounds like he’s been gargling with gravel. But there’s a melody, a catchiness, and the feeling that this is all a bit of a drunken laugh.

“Nothing To See Here” adds some real ska punk edge, fast and furious, it is also the sound of summer, it really is.

It is also the sound of a band that has been re-invigorated. NME reckoned they were “the best band in the world” at one point, but music has been a little spasmodic over the years. This is the second EP in a couple of years, and the scrappy, gang-filled brilliance of “Conductor 71” – which begins “Time ain’t been so good to you, you ain’t been so good to you”, almost sounds like they are reminding themselves to make the most of it, after all.

The last gig I saw before all this crap happened was Stiff Little Fingers and The Professionals showing Birmingham how to do punk rock. “Poetic Nonsense” would have fitted right in that night. Looking forward, looking up not down – literally – “up where the Seagulls shout, down where the mudlark sing” yells Edwards here, and somehow it has an uplifting, Levellers feel about it. Like it indicates somehow a festival field in the sunshine and some ….hope.

The last two songs here are just as mighty, for entirely different reasons. “The Bells Of Hell” (next line “go ting a ling a ling for you, but not for me”) is like a demented Christmas carol, before “King Of The Wild”, which begins: “do you really think we give a shit about you? I think you think we do” then adds one of the most British couplets ever. “what you won, what you lost, what your trainers cost? Guess what? Couldn’t give a toss”. Somewhere, I like to think Chas Hodges is looking down with pride.

And you know when I get Chas and Dave comparisons out, I mean business. “The Wrath Of Thoth”, is the sound of punk rock, with just a hint of the old music hall tradition.