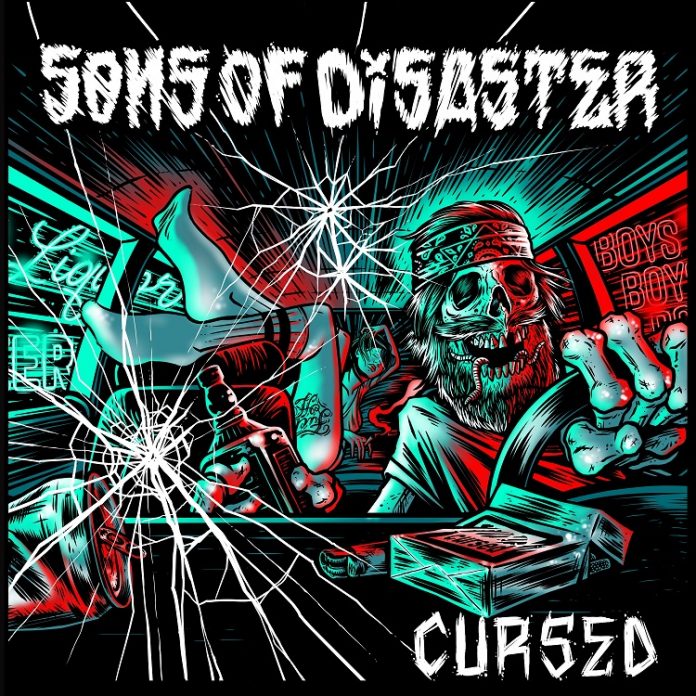 Let’s cut to the chase, shall we?

“Cursed” starts with a record called “Die Motherfucker” and it ends with one called “Fuck You”.

You probably already know what its going to sound like, right?

There aren’t that many surprises here, and why, exactly do you want any?

Sons Of Disaster haven’t been lurking on the mean streets of Brussels (I dunno if there are any mean streets in Brussels, and I voted Remain to be clear – and oh for the days when Brexit was all we had to piss us off) to mess about with niceties.

Nope, as they rather neatly put it themselves on their Bandcamp Page: “ Sons of Disaster is “High Octane Rock ‘n’ Roll” induced by overcharged riffs , selfdestructive hard-hitting drums , unforgiving bass-lines and lyrics comin’ to you from a brandy-distillery run by satan’s whores . . .”

And if that passage alone isn’t good enough to get a review, then the very least they could do after this is send one of Beelzebub’s ladies of the night round my gaff to help me “socially distance”.

Look, all this is preamble, so let’s break it down to Brass Tacks, as Mr. Neil Fallon put it, shall we?

If you want to live in a World where Motorhead and Orange Goblin are in a squat on a three day bender, and playing The Dwarves at Table Football, step right in.

This is filthy. Utterly grimy, and ain’t gonna piss about washing its hands. Not before, not after, and not during.

The opener actually manages to channel some Therapy? thing, before it cooks some meth, and “Frites, Putes, Bagarres” (on which singer Greg spits “this is Brussels”) is perfect, low slung, fast and dirty.

The twin guitar attack which so flavours this means “Burning Hearts” rocks hard, the vocals are just for chanting, and “Pain Is My Home” is as punk rock as you like. Honestly, there are hints of Agnostic Front here. This is harsh and its nasty.

Mostly, though, what makes this so superb is the lack of finesse. “Boozin And Drivin’” is unapologetic, and “Land Of The Sons” manages to navigate rock n roll in three minutes, 11 seconds of a boot to the bollocks.

I’ve never seen Sons Of Disaster live, but I am willing to bet that neither Selim or JT – the guitarists here – have ever played their instrument with it above their knees, and “US Bitch” (she’s a “dirty bitch without a fucking soul”, apparently) is a perfect example of the craft here.

And I use craft with good reason. This is deliberately ragged, proudly rough and ready. I am not suggesting SOD are the type of band to have many meetings, but I am saying they know exactly what they are doing. “Zero Authority” is your proof.

This is warts and all. Sons Of Disaster is music for people that used to buy Razzle’s Readers Wives. Airbrush whatever you like, the rest of us know where the fun truly is.