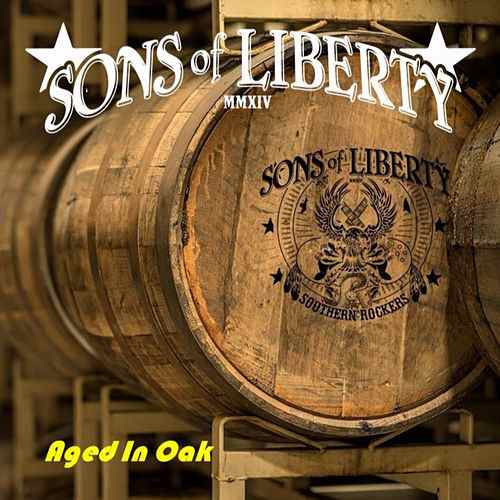 Rather like one of those Death Metal bands called Putrid Spawn (dunno if there is one, but there damn well should be…..) with the logo you can’t read, then sometimes you can tell a lot from the band name.

So when this six tracker turned up at MV Towers (ok, my email inbox that I looked at in my room, but you gotta have some license, right?) I immediately thought, “southern rock”.

Then I put the first track (conveniently entitled “If It Ain’t Southern” on. And this is the first verse:

And really, that’s the review right there, in truth. In the second verse singer Rob Cooksley (former  Mick Underwood’s Glory Road singer, who sounds like he was born to be in a band like this) offers the thought “if you can’t play Skynyrd and you can’t sing along” and really, that’s all you need to know.

Sons Of Liberty are the type of band that loves what they play and plays what they love. Guitarists Andy and Fred formed the band after deciding that as no one was playing this stuff they would, and in the case of songs like “Damned If You Do” they do so with real skill.

Not for nothing have they played with the likes of Skinny Molly – and crikey, Jay Johnson has opened for them so it doesn’t really matter what I say here, they’re cooler than me – and in “Dixie Whiskey” they make it perfectly clear: “a bottle of Jack is better than a beaujolais” (as a teetotaller I will take their word for it…) and that’s the vibe throughout.

“My Sister” features some brilliant slide guitar and gets a bit balladic, but then, you gotta have a slow dance from time to time even in the Sons Of Anarchy clubhouse, right? In any case the pace picks up again with “That’s Who I Am”, which not only amounts to their mission statement, but comes in with some absolutely filthy sounding bass and very neat harmonica.

The last one is “Movin’ On”, and The Allman Brothers would be proud of the opening riff and the inference is clear: this is a band that is on the road. And loves to be there.

They might be from the South West of the UK but a more authentic southern rock band you won’t hear. Authentic, because there is no pretence here. Instead, if they weren’t in Sons Of Liberty, these boys would be watching a band a bit like them.

So, what’s in a name? goes the old saying: in this case, everything, and it’s absolutely superb.