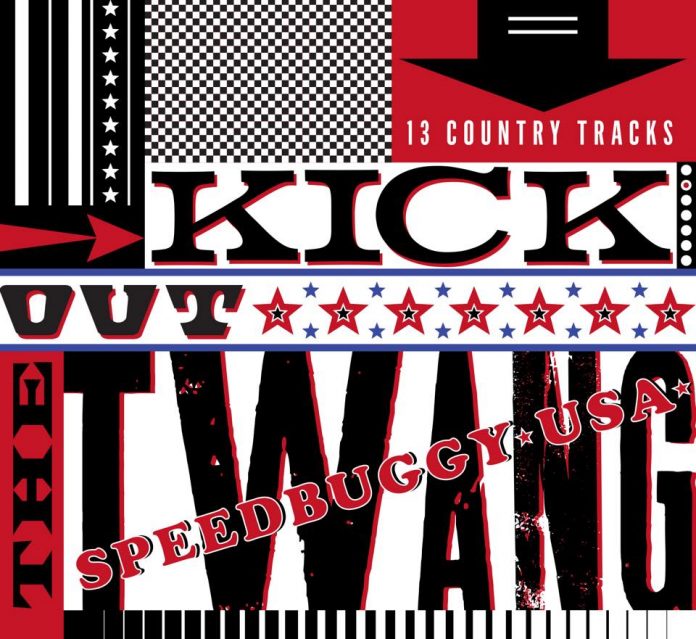 You know it might just be true what they say. The grass might be greener on the other side. Certainly, it is hard to imagine that anyone, anywhere is totally happy with their lot (ok, Keith Richards always looks pretty content, but he’s the exception that proves the rule).

I mean, I want to be in a rock n roll band, a blue-collar totally authentic country rock band, somewhere between Dan Baird And Homemade Sin and Jason And The Scorchers, but then those that are want to be in the rodeo.

At least they do if Speedbuggy USA are too believed, on “Rodeo Star” – the track where the title of this record is taken from – they cast envious glances: “If I was a rodeo star,” sings frontman Timbo – a man who has had his fair share of tribulations over the years, from a brain aneurysm to a house fire that saw him lose everything, “life would be so beautiful to me, I’d come out with a bang, hell, I’d kick out the twang….”

Whether saddling up is much fun, sitting in the middle of the UK I can’t really say. What I know for absolutely certain, though is that Speedbuggy USA have no trouble kicking out the twang or indeed, absolutely kicking ass.

They can also kick out the jams. Their own, or other people’s. This 13-song collection starts with a cover. And here’s a thing: as a personal aside, when I was a kid, I used to pretend I was a DJ playing my own singles (J Geils Band’s Centerfold was the first I ever bought as a six-year-old) and those my mum had, in the summer of 81/82 I never realised how good a song The Monkees’ “Last Train To Clarksville” was. I do now. The other cover here is “Unchain My Heart” which I already knew was cool, but here it brings out a soulful side that isn’t perhaps evident in their other work.

But its the 11 original numbers that you should get really excited about. “I Get Around” is Blackberry Smoke gone really primal – and suffice to say that those who get vexed about whether it’s too rock for country or too country to be rock will have a hard time with this. That isn’t the case with “Shaky Town”. This trucker’s tale couldn’t be any more country if Waylon Jennings was singing the thing, while the catchy hook to “Hold My Head Up High” is at odds with the lyrics.

Speedbuggy USA are clearly gifted players and writers, able to tap into the timeless and make it sound fresh. “South Bound” (not a Thin Lizzy cover, much to MVM’s chagrin) is a leaving song, like so many others, but its screeching lead screams urgency. Indeed, lead guitarist Seth Von Paulus has a ball here, like he does on so many others, and his guitar gently weeps on the lap steel drenched “Sorry” which is a heartbreak story for all the blokes racking them up at the end of the bar.

For all that some of these songs are rooted in sadness, they sound like the most fun ever, “Wood Screws And Nails” is a glorious honky-tonk romp, “Long Gone” on the other hand evokes a campfire spirit amongst its obvious stoicism, which is balanced out magnificently by the bleak “Honky Tonk Singer” which with it half spoken delivery, seems to ask the question: what if there is no light at the end of the tunnel?

“The Devil With Me” has a hint or two of early Steve Earle, while this particular guitar town – as it were – ends with them turned up to 11, as “Darlin’ I’m Coming Home” deals with the problems of being on the road and having a family, but secretly knows that no one here would change a thing.

There is an authenticity about “Kick Out The Twang” that is impossible to ignore, but there’s a glee that is even better. Add the two things together and you get something that suggests that Speedbuggy USA will be right in the fast lane laying waste to everything in their path.