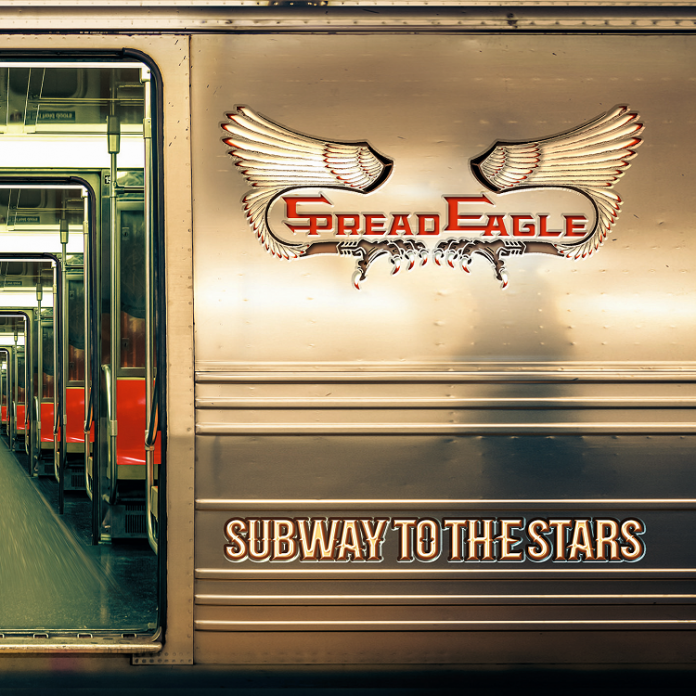 The other day I reviewed an album by a band from Memphis, called Roxy Blue. They were cult heroes back in the day to kids like me, and they’ve made a grown-up record that stays true to their original sound.

To be honest, if it wasn’t frowned upon, I’d just copy and paste those sentiments and add them to this.

From New York, rather than the south they might have been, but Spread Eagle, you see, operate in the same way.

29 years ago they released their debut record. And there were those of us that loved it. The passage of time has seen it voted into the top 20 sleaze metal albums of all time. Now, usually I’d do a big shrug at this point and say: “so what?” but it does show the class of the thing, if you moved in the right circles.

Unlike many of their brethren they followed it up with a cracking second record too, but that was it.

So, give or take a re-issue here and there, “Subway To The Stars” is the first time Spread Eagle have spread their wings, in a recording studio in over a quarter of a century.

Time, then, for the usual original members count-up. Two in this case. Singer Ray West, and a bassist that you may well know, even if you don’t know SE. Rob De Luca found fame afterwards, both in Sebastian Bach’s band and in UFO, where he was for 11 years before their retirement (?) earlier this year.

Those two still have the chemistry they always did too, but they are savvy enough to know that you can’t just rehash the past if you want a future. The title track kicks things off, and does so in a way that suggests a class. Indeed, the whole thing is shot through with that.

It seems they were bursting to get back out there too, given the exultant scream at the start. The chopping riffs, call and response vocals, and a slight air of danger to go with the melody, shows, perhaps why the band never – in my opinion anyway – fitted in easily in the whole “sleaze” thing. They were dubbed “East Coast Streetmetal” and if I never really understood that either, it did at least indicate a dark alleyways and a bit of a rumble, and it summed them up better.

“29th Of February” is the jewel in this crown. The bass groove sounds sleazy, the solo rules and the chorus? Well, try and resist it.

That might be the best, but the whole record sounds like it is fresher than it has a right to be, “Speed Of Sound” is a case in point, there, while the more metal tinged “Dead Air” is heavier and has a grandiose start to usher in the darkness.

“Grand Scam” is a real highlight too. Conjuring up the muscular biker metal of the likes of Armoured Saint, but then that is followed up by “More Wolf Than Lamb” and there are all the hallmarks of modern-day AIC over it.

Whether it is the two new members, Ziv Shalev, who’s guitars propel this throughout, Rik De Luca (cousin of Rob), on drums, is unclear, but there is a real energy here. “Cut Through” essentially amounts to a hard rock masterclass, while the slower, darker, “Little Serpentina” takes things off on a tangent, but is still somehow entirely in keeping with the collection as a whole.

“Anti-Social” has just a tinge of Backyard Babies about it. A glam sheen, some kind of undefined coolness too, but the idea that this is a nuanced attack is perhaps shown best by the last two. “Gutter Rhymes For Valentines” is a mid paced thing – at least until Shalev pulls a solo out of nowhere – and the closing “Solitaire” is acoustic, and gentle as you like. Somewhere between LA Guns “Ballad Of Jayne” and a piece of front porch acoustic blues, it is better than it has a right to be. That applies, maybe, to the album too.

It is brave of any band to come back after this long. A legacy of one stunning record is still a legacy and even if they never scaled the mainstream heights, there are still those who adored Spread Eagle all those decades ago.

Don’t worry. They now have two stunning records. “Subway To The Stars” is quite a ride.