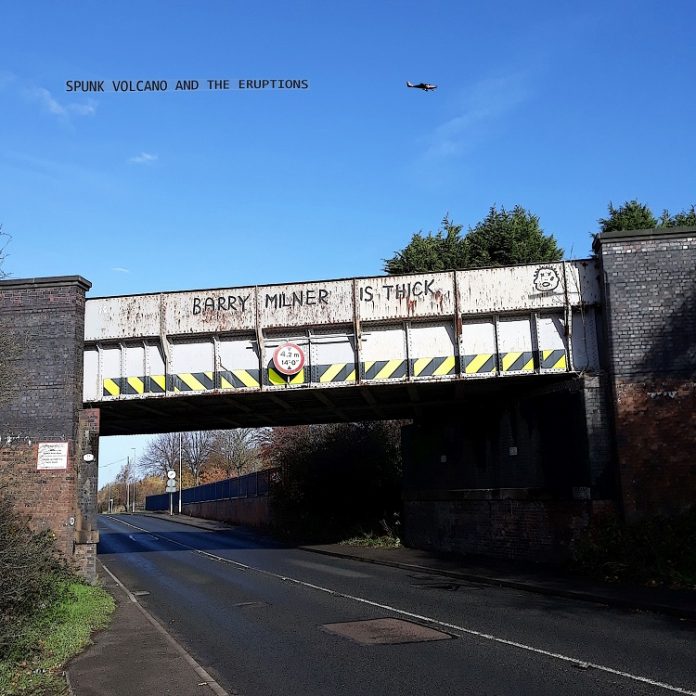 The 11th track on “Barry Milner Is Thick” (by my count album number five from Spunk Volcano and the Eruptions) is your litmus test.

“It’s Fucking Shit”, not only has a chorus that manages to make a proper sing a long out of: “It’s fucking shit, and you know it is”, it also contains this glorious vignette: “with a moaning wife, and whining kids, I’d drive my car off a fucking bridge. But knowing my luck I wouldn’t die, I’d end up in a coma or crippled for life”.

The rest of us – those with taste and a “world view” lets say, that coincides with all that, can dig into this slice of brilliance.

SV and The Eruptions are what two members of the incredible Dirt Box Disco do when they aren’t shitting out album of the year contenders, but they haven’t come from the North to sound exactly the same. Rather, they are what would happen if The Hip Priests used some Sleaford Mods lyrics as the reason to jam on some Wildhearts-esque stuff.

“Broken Hearts Make Better Songs” certainly has a “I Wanna Go Where The People Go” touch or two, but there’s a working class thing going on that kids my age, who grew up in the 80s will totally remember. “Football In The Sun (Ossie Ardilles)” is hands down the best single of the year (read here to find out why), but as much the lyrics evoke memories for me, then there is something unique about this band.

And its melody. It’s punk, it’s uncompromising, and make no mistake they ain’t doing children’s parties, but most bands like this don’t have the chug and the hooks of “Soldier On” – the aforementioned THP notwithstanding.

“Hard As Najls” is designed for a moshpit (Wildhearts fans get on the intro) and we all knew a bloke like this, and “Swiss Army Dickhead” mixes some genuine power pop with something that made me laugh out loud – and lets just say, that ok “Little Red Buggy” might veer towards a bit of thrash, but I’ve listened to a lot of Testament over the years and I’ve never heard a 97 seconds like this……

“Magic Manakin” rockets along like its had to many E numbers, and there’s a very real possibility that even allowing for the fact that “….Sun” is on this album, “Council Pop” might be its highlight. To be honest, if you aren’t wandering about singing “got no milk, got no squash, can’t afford the Coca-Cola” by the second chorus then I can’t help you any further.

“Looking for Something”  and “Only Got Eyes For You” show a more tender side still done SV style – with just a spoonful of Massive Wagons to go with it. “Tomorrow’s Promises” was another of the singles, and has echoes of Ferocious Dog, that is, if Ken and the lads were full-on punk.

The last one, “Caving In” casts them as Troubadour’s. Like Dog’s D’Amour when Tyla dials it down, it might herald a folk career, who knows? Well, me actually, but it is raw, that’s for sure.

Whoever Barry Milner is, I am not too sure. I do know that the record named after him is incredible and you’d be pretty thick to miss out.