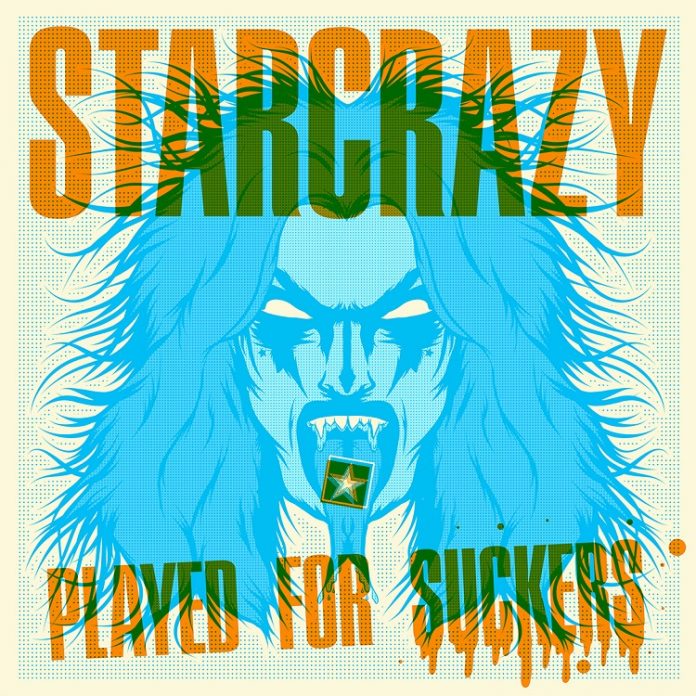 This means that, pretty much, that Starcrazy have been anointed by the Gods of Rock n Roll, frankly, and that Andy Thorley, of Maximum Volume will not be competing with Mr Furnier for the lad’s affections.

Still, I’ve got to have a stab, because Starcrazy rule.

Here’s what you need to know. There’s four of them, they are from Sydney – and they play rock n roll.

So I know what you’re thinking, as I have to confess I thought it too, Aussie Rock, denim and leather, beer and girls and blokes being blokes.

Well, no, not really, not here.

What “Played For Suckers” is, basically, is a Pick N Mix, a Carvery if you will, of all that has been rock music since about 1970 – which, when you consider that there’s only 20 minutes here, is no mean feat.

“Rise” the intro, sets things up nicely. I like an intro, gravitas and class usually is a given. In this case, it sets up a real Van Halen thing, in “Taking Down The Brutes” stadium sized intent, that’s for sure. But there’s always something kind of earthy and no nonsense about Aussies, so on this one, according to Marcus Fraser “you smell like a dog that needs a shower”, which is cool, obviously.

If that’s the evidence that these boys don’t take themselves seriously (and one of them is called Odin Wolf, which I hope so much is his real name) then “Long Way Home”  underlines it. “Old McDonald” appears to be the starting point here (lets just say it doesn’t end well with the farmer).

As much is this good time fun – think The Darkness if you like – then there’s a lot going on. “Disturb The Peace” does 90s Alt Rock with class. Janes Addiction with clown shoes on, basically. If these boys were caught stealing, it would be whoppie cushions, you imagine.

There’s some cracking songs here, but never are they better than the outright stack-heeled glam rock of “Gimme Back my Stereo”, impossible to listen to without smiling, it is mighty. And there’s a real feeling that they are just getting started with this, as the last one “Not The Only One” is from a totally different place, grooves so big you could hang your hat on them. It’ll be interesting to see which way this goes.

Only six songs, of course, so conventional wisdom is you don’t heap expectations. That said, a Starcrazy is born here, as it were, and you just have to sucker it and see.