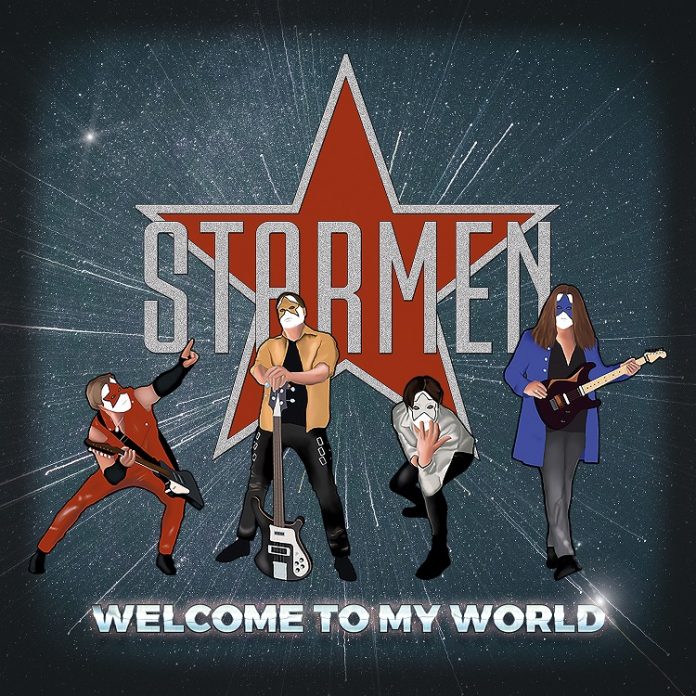 Don’t get me wrong, I can see the attraction from a bands point of view. Just imagine how cool it would have been to be Slipknot in the early days and walk through your gig with no one knowing who the hell you were, or Kiss, when they were the biggest band on the planet and no one having a clue what Gene and Paul looked like, but generally speaking the whole face paint thing, leaves me a bit cold.

It’s like back stories. Look, if you are into that type of thing, then hats off. Crack on, buy into it. Me? I am a miserable fella. All I care about with a record is simple: is it any good.

Starmen, from Sweden, have names like Starmen Purple, Starmen Gold and all the rest of the colours of the rainbow. There’s a long list of bands they’ve been in (the most notable of which is The Poodles, who are represented by Kristian Hermanson who plays Rhythm here and goes by the name of Starmen Red.

But you remember that the only thing I care about is if the record is good, right? “Welcome To My World” is a belter. Copper bottomed brilliance. Let ‘em have the intro which claims they are a “new act from outer space”, if they want, if what we get after is “Dreaming”.

Because “Dreaming” has you well, dreaming, of a time where bombast wasn’t a thing of the past, and where chest-beating was just fine. A universe? A milky way? A galaxy? Who knows, where harmonies could be stacked high, and where if you wanna wear a jump suit, you can damn well wear a jump suit.

These cats from space (inference with the UK band intended) couldn’t be more 70s if there was only four channels on tv and no one knew what an iPhone was, “Face The Truth” is hard rock from the Premier League, and whichever one of the troupe is playing the lead guitar here (it’s yer boy Purple) is a proper axe slinger. Solo’s? He’ll shit ‘em mate. And he is not ashamed (and he’d best have a fan on stage to flap his hair back too).

“Ready To Give You My Love” (he was born ready, I’ll wager) imagines a world where AC/DC play AOR, “Stay The Night” is a piano ballad for blokes that want to get laid. And actually, it has a more modern compass than most of them. To be fair, though, that’s not really what you signed on for with this, and “Warrior” which does the whole 80s thing in a way that says “come on then FM, what you got?” is much more like it.

“Freewheelin’” is more of the same, indeed, just assume that they are all ace. It saves time. This funks a bit like Electric Boys, too. “Evil” is like something Def Leppard wish they’d written. But couldn’t anymore and just as if to rub it in, the one straight after it, the title track as it happens, deserves comparison with Thin Lizzy’s heavy metal faze. Oh and it’s the best thing here, by a street (and the rest of it is damn good too).

“Mayday” gets serious, demanding climate change is tackled. It’d be cool if Greta Thunberg was there with her fists up high, “R.I.P” boasts a Diamond Head -ish riff, and “Mission Man” has the feel of a million things from the late 80s. Pick one. It doesn’t matter which.

“Electrified” ends the mission (I might as well get on board, I suppose) and this type of intergalactic stuff is more to my tastes than Star Trek.

Starmen, though, aren’t boldly going where no one has gone before. To claim they are would be both entirely wrong and also to miss the point. Rather this is a band that proudly and resolutely sounds like its heroes.

They deserve blast off. It cannot be the final countdown. Because if I was heading for Venus, then I’ll take “Welcome To My World” with me.