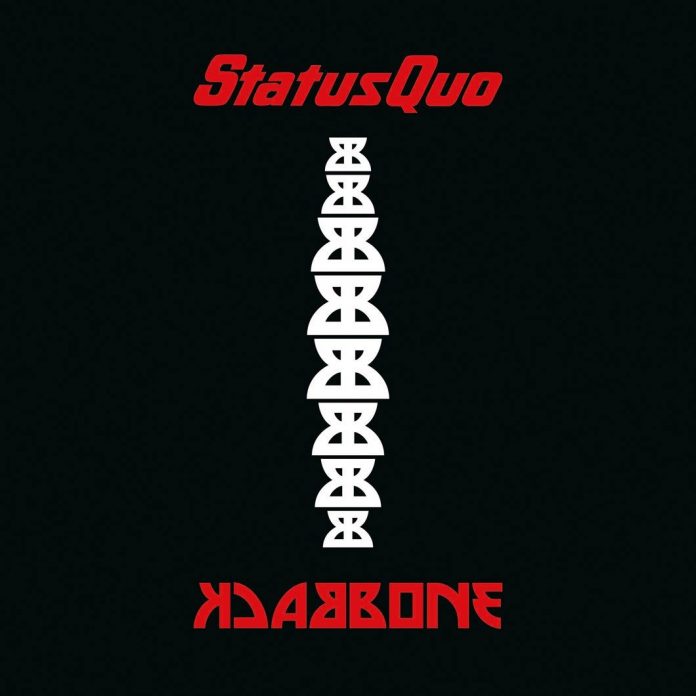 There’s something kind of cool about 33 records. A 33rpm pun in there, somewhere surely.

Give or take a couple of acoustic records, and a soundtrack album for a film so bad it made one of those Elvis ones back in the 1960s look like an Oscar winner “Backbone” is the first genuine Quo record for eight years.

Now, the elephant in the room.

I can well remember the text on Christmas Eve 2016 from a mate that said simply: “Rick Parfitt, RIP”.  Especially poignant given that we’d taken his little lad to his first gig a couple of weeks before to watch them (Rick hadn’t played that night).

All of those things – the longevity of the band, the length of their careers, how much they mean to people and the absence of one of their longest-standing legends – mean that “Backbone” has a weight of expectation on it.

Put simply, they owe it to their own legacy to not have backbone suck, bluntly. They don’t need it to be one of those things that comes back and everyone wishes they hadn’t.

On the flipside of that, of course, is you don’t get to 33 albums unless you know exactly what you’re doing, plus their support slot with Lynyrd Skynyrd (and if you ask me it should have been the other way around, but I digress) proved they could do this, still.

“Backbone” rather underlines it.

“Waiting for A Woman” boasts a metronomic drum beat and some bluesy boogie, but it is almost as if they’re feeling their way back in. Then…..

Well, then, comes “Cut Me Some Slack” and let the be no doubt about it. Quo, are back. If you could bottle the sound, then it’s right here. “I know you know I am addicted to you” sings Francis Rossi here, and ok, I might be looking into it too deeply, but, of course it’s about the band. Of course it is.

“Liberty Lane” – a new one they played that night with Skynyrd – pummels along like, well, Quo jamming with The Stones. It’s got energy, its got style and its catchy as the flu.

And so it goes, basically. “I See You’re In Some Trouble” starts acoustically, but there’s only one band this is, “Backing Off” might have a darker more strident groove, but lets be honest here, nothing is reinventing the wheel. This is too well oiled a machine.

“I Wanna Run Away With You” could have come off any Quo album in the last 50 years, and is such a knees-up it is one step away from getting off with Mother Brown, and although the title track does do some different stuff, it does it very much on their terms.

Put simply. They’re ace at what they do, and they aren’t doing anything else. “Better Take Care” is the best thing here, by virtue of the fact its hook is the best, and the lead work on “Falling Off The World” is not the first time that Richie Malone deserves praise.

He was inspired to play the guitar after hearing Rick, and he can be immensely proud of what he’s done here, and when he speeds it up on “Get Out Of My Head” much fun is had.

11 of the most Status Quo songs you can possibly conceive end with a mid-paced one. “Running Out Of Time” even boasts some dreamy harmonies in a nod to their old stuff, perhaps, and it poses the question: “will we ever stop?” Maybe they mean the band again, maybe not. Whatever, why should they?

No one is better at being Status Quo themselves, and “Backbone” is just about as good as you’d ever hoped it might be.