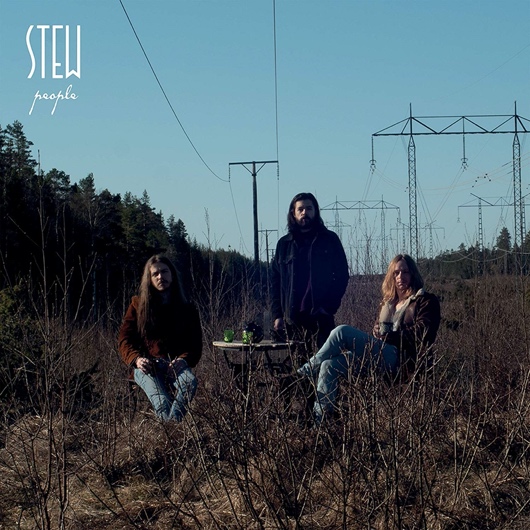 Strap in, it’s yet another one of my album reviews where I wax lyrical about the latest Swedish retro sounding rock band. This time it’s newcomers Stew that have delivered their first full album and a mighty fine effort it is.

The band, who get the inevitable tag of a power trio, consist of Markus Åsland (Bass/Vocals), Nicklas Jansson (Guitar), and Nicklas Dahlgren (Drums). They got together in 2017 and released an EP ‘Hot’ in 2018. The lead track off that ‘Might Be Keeping You’ was picked up on one of Classic Rock’s cover CD’s, so some readers may already be aware of Stew from that exposure (that’s a great song by the way and there is a terrific live in the studio version on YouTube).

The obvious passion for late 60’s and 70’s guitar driven rock is there for all to hear. The tonality of the music is spot on – imagine those Whistle Test compilations that BBC 4 put out with Bob Harris whispering how great the next band is. On each of those shows there is usually a band that you don’t remember and who impresses and if you can picture that, then you know what Stew sound like. There is a warmth in the recording that harks back to the days of vinyl records and the album is impeccably played and produced throughout.

A very short musical doodling opens the album before the opening track proper crashes in. ‘Right On Time’ has a real Free sounding funk about it with a bit of the James Gang mixed in. Markus Asland has a decent voice as well, well suited to this style of blues rock.

The title track follows and is even better – the rhythm boys really drive this one along, allowing Jansson’s tasteful guitar work to shine. ‘Newborn’ is more blues based and would sit comfortably on an early Whitesnake album. The same could be said of ‘Endless Journey’, one of the stand-out tracks on the album. The riff is great and the quieter parts of the song, embellished with keyboards, are really well done.

‘Play The Fool’ is the complete opposite – a playful song that moves along on some great drumming and a slinky riff. ‘Goddess’ is another of the album’s strongest songs. Falling into the slow blues category but not in the deep south sense – think prime time Robin Trower for this one and you’ll be somewhere near. It builds from its quiet opening and as it does so the guitar playing gets more intense before launching into a faster paced section and solo. I think this song would be spectacular on stage and would be suited to an extended jam if they were so minded.

‘Afraid Of Getting Nowhere’ is similarly bluesy before they hit another home run with ‘Sweet And True’. More James Gang style riffing gives the one a real commercial sheen. ‘Fruits’ follows and the structure of this song has a big Cream/Jack Bruce influence. It’s an up-tempo song and is about as ‘heavy’ as Stew get – a real musical showcase for the band as a whole and another song I would love to hear live.

The album closes with ‘Morning Again’ – birdsong and an acoustic guitar herald the calm after the storm. I appreciate the contrast this song gives but it seems a little incongruous with the rest of the songs here and for me personally, it didn’t add anything to the album.

Still, that is my only gripe. Stew show a lot of promise; the playing is great, the guy can sing and they write original but familiar sounding songs. Whether that is enough to lift them above the many other bands plying the same trade remains to be seen but in the meantime all they can do is the best they can. On that basis, they can consider ‘People’ a job well done.