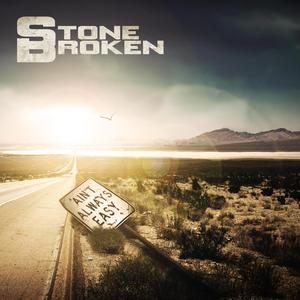 Gene Simmons might be a bit of a knob – and he probably said this for effect (or cash) – but nonetheless, he declared a couple of years ago: “Rock is finally dead. The death of rock was not a natural death. Rock did not die of old age. It was murdered.”

Now, you could give up in the face of all this, or you could if you were Stone Broken ignore the naysayers and get out there and just do it. Those local bands who play the same pubs 12 times a year and moan when no one shows up probably need to learn a thing or two. Actually, they probably just need to listen to “I Believe” a track tucked towards the middle of “Ain’t Always Easy” (the second full length from the Black Country’s most polished hard rockers). The albums centrepiece, it’s chorus line is a rebuke – perhaps – to both Simmons and the bitter bands with the talent but the lack of drive: “Honestly,” sings Rich Moss – who formed the band only five years ago – “you can be anything you want to be. I’ve got a feeling you’re going to have the time of your life.”

Now, that might be a bit Shinedown (and musically nothing Stone Broken do travels far from the arena rock of bands like that, say, or Alter Bridge, Nickelback, or Black Stone Cherry) and whilst none of my reviews miss a chance to poke fun at Shinedown for being dreadful, the reason SB are better – way better – than Brent Smith’s US dullards is simple. They mean it. There is nothing forced or false here. This is a band doing what they love and what they are exceptionally good at. Put another way, if Shinedown’s “Bully” sounds like it was written by a focus group, then everything on “Ain’t Always Easy” sounds like it was written from the heart.

Stone Broken have always sounded good, now they sound like a million dollars. The opening groove of “Worth Waiting For” is one of a band that is headed for arenas, and everyone here knows it. “Stand up, show them what we’re made of” offers Moss here, and its almost as if he’s reminding the band that this. Is. Their. Time.

“Let Me See It All” adds a whole dollop of sleaze and it will come as no shock to anyone here that it sounds like “For All The Right Reasons” era Nickelback. It’s probably supposed to.

The fact that Stone Broken live and die by their hooks is well known, and “Heartbeat Away” (which deals with serious subjects) delivers its punch wrapped around a huge one, but crikey they can write ballads too. To that end “Home” – which is more Mid-West than West Mids – is perfect.

It feels, though, that Stone Broken are a band that are happiest with fists in the air, “Follow Me” provides ample opportunity for that, as does the glorious “Doesn’t Matter” which is primed and ready to be an off the shelf anthem.

Go through history, hard rock has always had its tearjerkers, its power ballads. Being students of the genre SB understand this and have their own, its called “Anyone” and there won’t be a dry eye in the house as some kid tries to snog “the one” while its playing. Being a cynical old soul we’ll leave them to that and instead enjoy the brooding “Just A Memory” instead.

It’s noticeable that like their last one, nothing here outstays its welcome – the whole thing is only just over 40 minutes – and the maxim of “don’t bore us, get to the chorus” applies here. “Otherside Of Me” proves this perfectly, as well as having some fine lead work.

And if the whole thing ends with a BSC style southern rock swagger called “The Only Thing” that couldn’t sound more content if it tried, then the key comes earlier. And it comes – again – in “I Believe”. Singing about his heroes, Moss sings this: “I came home and played around, I practiced every day. Rewind, every time, and do it all again. Hoping someday that I’d be just like them.”

If “them” are the arena bands I assume they are, then “someday” is getting closer. “Ain’t Always Easy”? Maybe not, but Stone Broken don’t half make it look just that.