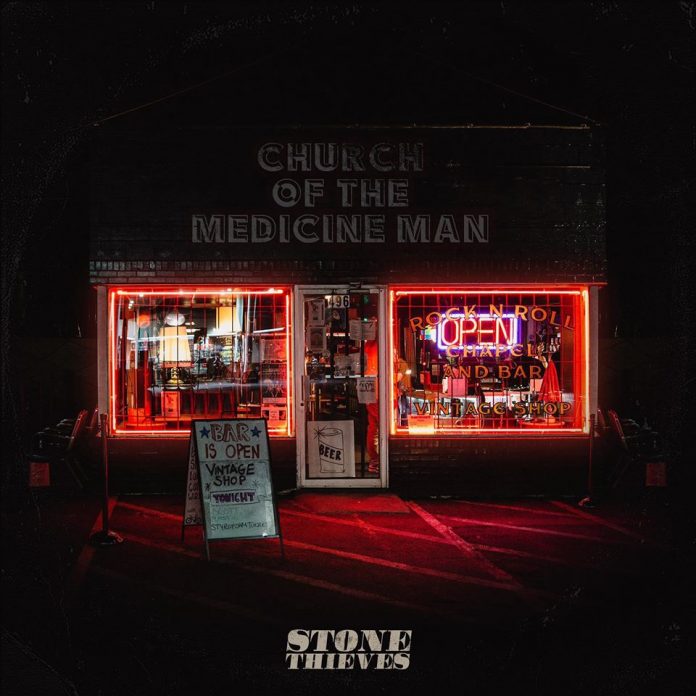 There will doubtless be an exasperated PR man rolling his eyes here – but you can’t fault my honesty, so I am claiming bonus points.

Not to let too much daylight in upon magic here, but most of the time, when you review these records as I try and do every day, you get a sheet of paper to give you some info.

This is good, generally, because it makes me look like I know what I am talking about. There are many bands that I review on this site that I have never heard of before, and these info sheets don’t half help with obscure facts so I look like far cleverer than I deserve to.

….or at least, they do if you read them.

See, I was listening to “Church Of The Medicine Man” the other night. It was late, and the noise that came through my headphones was utterly glorious. I was making my notes, saying things “Blackberry Smoke”, “Whiskey Myers”, “Heartland, blue collar writing”. Then there was things like “hints of mid-period Steve Earle” , “The Faces”.

Need I go on? This, you see is Southern Rock. It is brilliant, too. Goodness me, there’s two versions of the same song here – “Wheels” bookends the thing, and I honestly can’t tell you which one I prefer, so different is the vibe of the rock version at the start to the piano take at the end. The first one is euphoric, like you are going to a gig in a long way away to watch your favourite band and looking forward to it. The reprise, is like its 1am, you’re on the way back, there’s traffic everywhere – oh and you’ve got work tomorrow.

But if it’s southern rock and its brilliant, then it’s also from the UK.  The four piece are not from the heartlands, but London – which is why you should always read these things when you listen, not two days after when your intro doesn’t make sense!

It also puts a totally different perspective on the near title track, “Medicine Man” which has a hint of Mott The Hoople about it and utterly glorious harmonies, and if – like me, back in 1989/90 you had your head turned by the likes of The Quireboys, then you will absolutely love “Let The Good Times Roll”, which sounds less like a night in a spit and sawdust bar, bar than something regretting what you did last night. “Second rate jukebox, “ sings Aaron Gardner, “playing second rate songs…..”

They aren’t here. Not Stone Thieves.

You never know what to say at the end of these things. Do you burden a band without an album out or play it safe? On this occasion, let’s raise the bar. This is the most exciting EP of its type since the first Temperance Movement one.

Or put it another way, I’ve just forked out a fortune this morning on buying tickets for The Black Crowes. It’s 20 years or more since The Robinson brothers did anything this good.