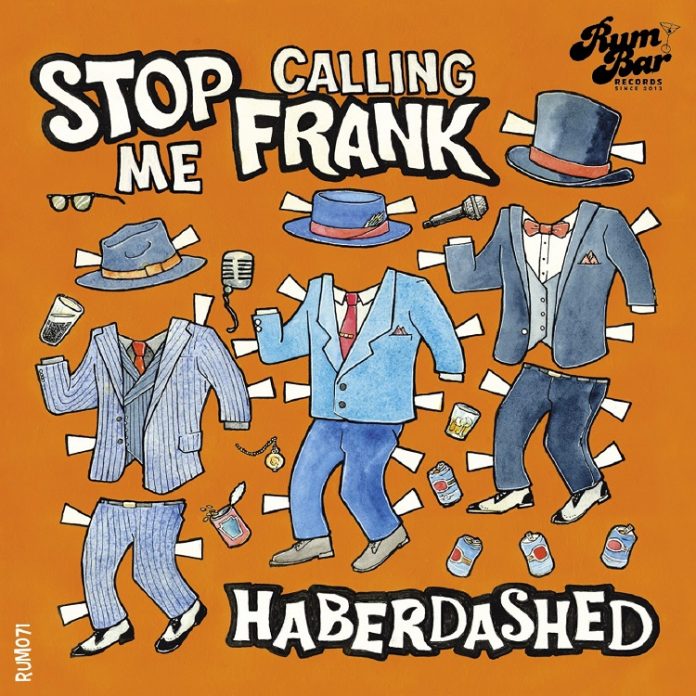 There are certain words which are just fun to say. France had a football player (I guess I should call it soccer as this is an American record?) called Bixente Lizarazu and I don’t care who you are, that surname should make you smile.

Haberdashery is another. Just down the road from where I live there is a row of shops. Growing up one of them was a Haberdashers. I used to try and get my mum to take me in there. When I found out it was just a sewing place, I was gutted.

To write a song called “Haberdashery” you need to be a linguist of the highest order. To make it rock, to make it gush with the foaming frothy bubbles of rock n roll, brother, you gotta be a genius.

That, or you are in a band called Stop Calling Me Frank.

Look, this is a wonderful record. 10 songs of the purest, most unadulterated fun you can have while tooting a sax and thrashing a guitar, but its way, way more.

See, appropriately for a record called “Haberdashed” this is all about the adornments, the trinkets. The opener, the utterly glorious opener, “South Of Somewhere” has three verses. Each one mentions a jukebox. The three songs it namechecks: “Little Red Corvette”, “Benny And The Jets” and “Desolation Row”. Lets get real here. That’s a hell of a selection, right?

Stop Calling Me Frank are lifers in this rock n roll. A couple of years back they released their first album in 30 years. “Spider In My Beer” was ace (my review is still on Google, as I have just found out) but this is better.

It’s better because….well, its like this. Years ago Southside Johnny used to play a venue about 20 miles away from where I live. Every year. We’d go, and it was the best rock n roll party you ever did see. This has the same spirit. The sax solo of “Annoy You” over the garage rock beat? Yeah, that’s the sort of thing.

Then there’s “King Tuts Tomb”. A track we already reviewed on the site as it is the lead song on their labels summer sampler. It’s punk rock if it was done by The Blues Brothers, that’s what.

But this is all sorts of things. It’s everything that’s cool. “Baby Done Drove” is blues with a turbo charge, “C’Mon All Ye Boys” gives their fellow Bostonians the Dropkicks a nudge and says “yo, lads, you ain’t the only ones who can do this Celtic thing, you know”,  and I dunno, but the 60s stylings of “Baby Loves To Rock” might be (along with the opener and “….Tomb”) the best damn thing here. Two reasons: It lists about 25 bands in 15 seconds in the best “We Didn’t Start The Fire” way, then says “but she hates Billy Joel!” before offering this classic: “My baby and I got music connections, we’re gonna merge our record collections…..” there is no way to follow that.

“Bayou Baby” is Cajun fried, but only by way of CCR, and the suggestion that you have run out of excuses is shot through “Get Out Of Your Own Way”. Maybe the cure is simply to turn this up loud and forget your troubles? “Baby Cyclone Baby” finishes it in a way that is like Chuck Berry (a disclaimer here, I don’t particularly care for Chuck Berry, but I love covers of his songs), so the freedom, the timeless rock n roll is all I mean.

In the UK album charts right now, Bob Dylan is number one and Neil Young is number two. I mention it, because Bob Dylan got a Nobel Prize for literature and he never got the word “Haberdashery” in a song: Another disclaimer, he might have, I just haven’t been bothered to research. Also I mention it for a far more serious reason. Namely it proves there’s no sell-by date on rock n roll. The best stuff stays fresh forever, man, and this is the very best.

Pure, raucous fun. And it shines like a gold button on a fancy suit. And all the girls are crazy ‘bout a Sharp Dressed Man, after all. Especially one called Frank.