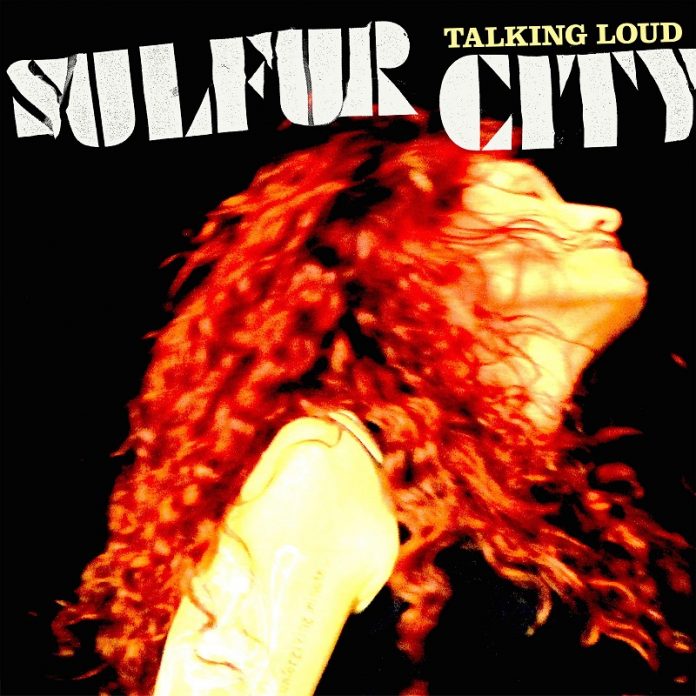 There’s a song about a third of the way through this fabulous record called “Ride With Me”. On it, organ swirls, the guitar solo soars, and then frontwoman Lois Paradis – who as good as the rest of the band are, proves to be the absolute copper bottomed star of the show here – suggests quite calmly as the backbeat slinks its way around, “I am a woman on a journey, do you wanna ride with me….”

Strap yourselves in, brother, cos this is quite a trip.

The passion with which Sulfur City do things is perfectly obvious throughout, there’s something glorious primal about the way songs like “Whispers” and “War Going On” are constructed, and whilst you wouldn’t want to call them retro, given that might imply they were dated when in fact this record is infused with a life and vibrancy that is entirely fresh, there is a definite air of the throwback about “War Going On” and the like.

Paradis herself puts in an heroic shift, coming on like a full on fire and brimstone preacher on “Pockets” then dripping with sensuality on “Don’t Lie To Me” and as if to prove how versatile they are “Sold” is somewhere between blues and a deep south Honky Tonk. On this Paradis claims she sold her soul to the devil – the safe bet is that Beelzebub gave it back as he probably couldn’t handle it.

There’s no letting up in either quality of song or fervency of delivery, either. “Highways” is simple and glorious, while “Johnny” is almost bursting to rock, beginning as it does with a fine solo from  Jesse Lagace and just in case you thought you’d got this record pinned down (our advice would be don’t even try as you can never second guess it) “One Day In June” is a meandering epic, which brings in some jazz-like elements to the sound.

“Raise Hammer” is a kind of song you might hear on a chain-gang, in one of those old movies, and the collection closes with its hair let don, the drinks ordered and the hedonistic fun of “Don’t Know Me”.

On this Paradis offers – with what like to think was a knowing filthy grin, “you think you know me, but you don’t know a thing”. MV would like to respectfully disagree, we like to think we know a superb record when we hear it, and in “Talking Loud” we have just heard one.