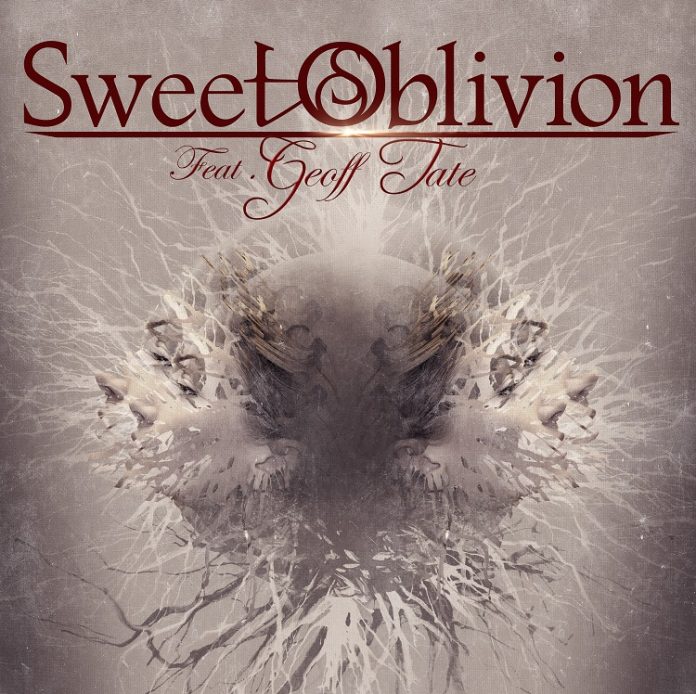 As it’s right there on the cover, we might as well get it out of the way to start with. Sweet Oblivion is the latest project to feature Geoff Tate.

And actually, that’s where it gets interesting.

Because here Geoff, who continually proves his talents with his Operation: Mindcrime outfit and notably this year with his stunning contributions to the recent Avantasia record, is challenged.

Sweet Oblivion, you see, is something that sees him team up with a team of skilled Italian musicians put together by Simone Mularoni, the mastermind behind prog metal kings DGM.

This happened a few months back when FM’s Steve Overland was placed in a group called Groundbreaker, lending his voice to a collection of musicians that their record label boss wanted him to work with. This is from the same Frontiers stable, so whether it’s the same thing is likely?

On that one, Overland sang on something that still sounded like FM, but also had a real freshness too. Those words could just as easily apply to Sweet Oblivion.

That is to say, there’s no point in anyone saying it doesn’t sound like Queensryche – crikey, Tate has one of the more distinctive voices in metal and fronted that band for a couple of decades – but this is one of the more superior records of its type that are around right now.

Opener “True Colours” does raise a smile, and a kind of “did he just say that?” moment. It’s happily chugging along in a classy way, somewhere between hard rock and power metal, and clearly expertly played, before the vocals kick in. In the first verse, Tate sings about: “the same old schtick that you’ve had for years”.

It can’t just be me, surely, that sees the irony there?

Away from that, and because of the incredible band that Mularoni has put together, there is a feel of prog metal about this and let’s be honest, Tate has always been hard to pin down. A touch of Spock’s Beard – a name I kept coming back to throughout – is shot through the song that gives the band its name. The solo here is phenomenal too.  The keyboards of Emanuele Casali are absolutely crucial to this as well. He powers “Behind Your Eyes”, which marries a real suggestion that it just wants to be an 80s arena rocker, with a modern crunch.

If the rest sort of hint at prog, then “Hide Away” dispenses with any pretence and jumps straight in the deep end marked “Symphony X” and its sounds huge. “My Last Story” soars, and you have to say that Tate is in fine form here.

10 songs doesn’t leave time for any real excess flab. So “A Recess From My Fate” has a bit of a chug, a little gallop, and a Saxon like flourish, while the guitar tone on “Transition” is strikingly different. Darker, more sinister. They balance this out with “Disconnect”, which if not quite a ballad is the first thing approaching one, and with “The Deceiver” which is faster, more furious, if you like and adds a real sense of fun that might have been lacking elsewhere.

“Seek The Light” – and I don’t know if there are any plans for the band to play live – is the one that will have fists in the air. Big grooves, a modern lookout, but supremely pulled off by a collection of musicians who have a mastery of the craft.

It is easy to forget, sometimes, just how much talent Geoff Tate has. 2017’s Operation: Mindcrime (the band) was a timely reminder. This is just confirmation. When he plays original songs there’s few better. No one here is entering oblivion, and this is as sweet as it gets.