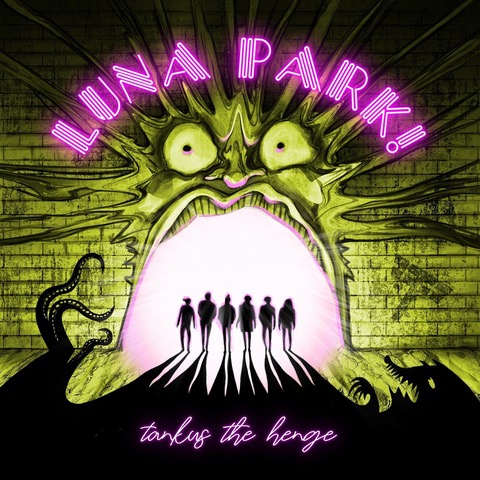 It`s good these days for me to recognise a band which I do with Tankus the Henge but that`s as far as it goes. If you asked me what they sounded like I’d have to guess and say a festival band maybe. To be fair that`s heading towards what they are according to social media, an eclectic and unique style of music which they term Gonzo rock’n’roll with influences from New Orleans jazz, psychedelia, rock and seventies funk. The band have a new album, their third called “Luna Park!” ready to hit the streets. While not a concept album, it does have a theme and hones in on an array of colourful characters including “Susie Sidewinder, “Sundance Kid”, and “Pilgrim”, the record follows their journeys as they each turn their backs on a city they once loved and make the journey to the utopian Luna Park! in search of a better life.

The album opens with `god oil money` with brass and guitar riffs announcing the arrival of TTH as languorous vocals add to the cacophony of sound which has a sort of sleazy feel about it. There`s brass, guitar solos with harmonies and handclaps towards the end and a really engrossing chorus of “love is where we start and loves where we end.” There was a real Southside Johnny and The Asbury Dukes feel about “Fayaway” but delivered with an estuary English accented twang. The number is based on the semi-fictional character in Typee, a nautical adventure novel by Herman Melville (who went on to write Moby Dick). An inhabitant of the island the leading character lands on, he can’t help but fall under her spell in the strange new land he finds himself in.

The city that the characters are escaping from is polluted by `Glitterlung` related in said song which opens with singer Jaz Delorean and a piano before he`s joined by a variety of the band members to fill out this quite mournful piece. There`s another quite melancholic number with `Back to you` but it does have a sort of hypnotic dreamy ambient texture at times.

The first of the characters we`re introduced to is `Susie Sidewinder` where musically it has a sort of jazzy burlesque air about it. She`s some lady as they repeat the lyric of  “Oh, Susie Sidewinder you got me grinning like a Cheshire cat, How come the blues just never find ya, I get my finest sleep from one day like that.” There was a much funkier feel to `Sundance Kid` seemingly somebody from the wrong side of the tracks, it had me in mind of some of the stuff Kid Creole and the Coconuts used to do in their heyday.

João Mello takes over the vocals on `(Living like a) Pilgrim` a groovier offering with some delightful brass splashes throughout. I felt that `Worries` had a really late-night smoky after-hours club vibe with lyrics narrated as in a nigh on confessional style. I loved the double bass and group harmonies at the chorus.

`The Only Thing That Passes Here is Time` has a wonderfully retro feel about it and begins with an almost hat tip to Jack Brel but gets the full band and brass treatment at intervals throughout and a dreamy sax solo halfway through. In `Glitterlung (reprise)` we have a brief return of the previous plaintive number but in edited form.

`Luna Park` is a bit of a mix match with rock elements blended with a more Latin jazz flavour, a bit of an all-out rhythmic affair. The album closes with `Staying On This Side Of The Dirt` which nods towards Madness. A sort of London centric composition which had elements of Dennis Waterman`s `I Could Be So Good For You` and a bit of a sixties theme tune about it.

`Luna Park!` is an interesting release. I`m not quite sure of the concept theme and if it works but I enjoyed the album nevertheless and I have a lot of respect for a band that`s prepared to try something different. These excellent musicians Jaz Delorean (vocals, piano, trombone), Tim Fulker (guitar), George Simmonds (trombone), João Mello (tenor sax, keys, guitar), Franco Pellicani (drums) are ably assisted by Tom Sinnett (bass, guitar, moog, strings), Seb Skelly (trumpet) and Jodie Marie (backing vocals). Tankus the Henge are billed as a genre bending, never ending, furious and joyous force, which pretty much sums them up.

You could do worse that joining in on this journey headed for Luna Park.