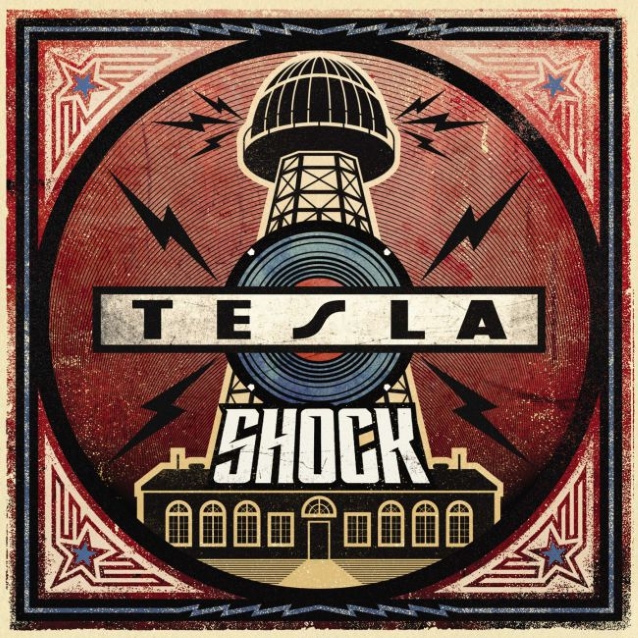 I am not and have never been shy of a pun, but this isn’t one. It was, though, something of a shock to find out that “Shock” was only the eighth album of Tesla’s career.

They’d been a staple of our early record buying. “Mechanical Resonance” came out in the autumn of 1986, when we were voraciously consuming anything that came out from the US and all those bands changed my life. Then, a few years later they released an acoustic album, “The Five Man Acoustical Jam” that opened our minds to different sounds.

Like – nearly – all the bands from that era, though, Tesla struggled once Kurt decided he wanted entertaining in a different way and brought a generation with him.

Since reforming in 2004 they’ve stuck some records out, but let’s get it said right now. None of them have been anywhere near as good as “Shock”.

To make this record, interestingly, they turned to an artist from a band that never quit in when the 90s took a swipe at arena rock. Phil Collen produces this, co-writes the thing, and he does a mighty job in truth.

One of the key things about Tesla in 2019 is that four fifth’s of them were Tesla in ’86 and whatever frustrations they felt after their last record “Simplicity” in 2014 (when they admitted they were not going to make another album) are blown away by the time the intro to “You Won’t Take Me Alive”, which sounds sleazy and as more full of beans than a band four decades into their career has any right to. It swaggers, it crunches, it is – to all intents and purposes – just happy to be here.

“Taste Like” is proudly rooted in the 80s, but not in a dated way, and whatever else Collen learned from Mutt Lange, then the importance of a chorus that soars, seems to have been right at the top.

Bands often say, “oh, we don’t sound like anyone else” and generally it is hogwash. In Tesla’s case, though, it kind of rings true, certainly they plough a different furrow to their peers. “We Can Rule The World” has echoes of The Beatles, for example, but done through a prism of hard rock. Then they follow it up with the title track, which if not a shock per se, then jars with its electro beat.

One thing that all these bands always had, though was a big old ballad. And “Shock” has “Love Is A Fire” – and if you can, unsurprisingly hear some Leps influences throughout, then let’s be real here, this one is “When Love And Hate Collide” rebadged.

Much better is “California Summer Song” which injects some real sunshine over a track that will you have you reaching for your old Everclear stuff. “Forever Loving You” is another ballad – of course it is – but it is more overtly pop than power, Daughtry would be sticking another Gold Disc up in their houses if they’d got this.

It’s personal taste, of course, but the rockier moments are where “Shock” scores, and also where it does things you don’t expect. “The Mission” broods more than most, and “Tied To The Tracks” may well be the best of all. It’s slide guitar is imbued with a real urgency.

There is some damn fine twin guitar in the effortless cool of “Afterlife” – which would have “massive radio hit” written all over it, if such things mattered these days – “I Want Everything” is more muscular and a wonderful example to the Bon Jovi’s of this world that growing old doesn’t always have to mean going middle of the road.

Tellingly, the record ends with a track called “Comfort Zone” which grooves along on the back of a truly filthy sounding bass line, but which also, maybe, is indicative of a band that challenged itself this time around.

Never ones, in truth, to follow the herd, on “Shock” Tesla really do sound electric.