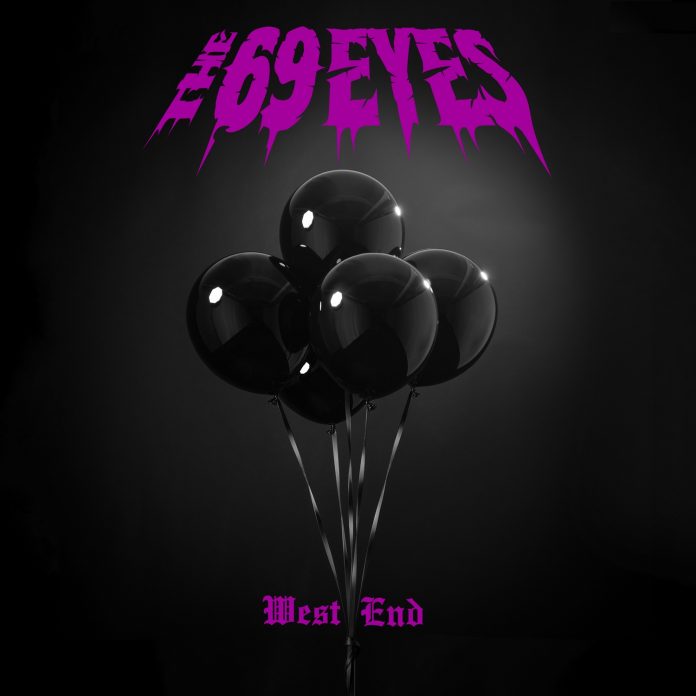 I read the title for The 69 Eyes 12th album and two things immediately came to mind. First, there was bright lights and wild nights. Second, was – shoot me if you want – The Pet Shop Boys.

Neither seemed to quite fit 69 Eyes. Bright lights kill vampires, right? And I can’t imagine them in an East End town with dead end walls (and no, I didn’t have to Google them lyrics – and neither would you….)

Then I read an interview with Jyrki69 (probably not the real name of T69E’s frontman) and he has a totally different take: “The title “West End” evokes a dark image – when something dies, something new takes its place and we all have to change in order to stay alive. I feel like this planet is at a turning point. The end of the western world is near and the question is: What will happen when the west ends?” Which, probably suits them better.

One thing I won’t be disagreeing with him on is another statement he makes in the same interview. “Ever since the first rehearsals I felt we had something magical coming”, and yeah, you can be forgiven for getting hyperbole fatigue and going “oh do shut up, there’s a good bloke”, but not here.

Listen to it – just once, so immediately brilliant is this – and then admit that Mr. 69 is right.

There are some moments of astonishing brilliance here. “27 And Done” which is like they are jamming with The Mission, The Cult and HIM and coming up with something that befits that trio. Bottom line here: if you listen to this chorus and aren’t singing “lets all die young, its so easy and fun” by the next time it hits, then you might already be deceased.

Miraculously, though, that’s not even the best thing here. And its not the best thing here because “Last House On The Left” exists. It is a homage to some horror film I haven’t seen, but here’s what I know. Shredding metal mixes with hard rock and a genuine rock n roll piano. Oh and I’d best mention that Dani Filth, Wednesday 13 and Beastö Blancö vocalist Calico Cooper (her Dad is the King Of Rock) appear on this one, just as they do on the opening cut “Two Horns Up” and a more strident beginning you will not find.

Crucially – and you can pretty much say this about their whole career – The 69 Eyes are not scared of what they are, it’s just here, they have mastered it.

“Wild Orchid” is polished in black, and those deep vocals have a kind of Volbeat thing going on, and if “Change” provides just that with its strings adding more depth, then when they add more urgency, as on “Burn Witch Burn” they are pretty much unstoppable (and any record that contains the lyric: “poison apple, free delivery, whatever happened to freedom and liberty?” is too cool to care what the likes of me thinks about anything.)

Who knew there were so many shades of black? Bazie on lead guitar is having a fine time throughout, but never better than on “Cheyanna” which, to me anyway, has me reaching for “Say Just Words” era Paradise Lost records.

There is an almost nursery rhyme feel to the start of “Death And Desire”, although whether they have nursery rhymes in hell is a moot point, and there is a feeling that with the words “I wanna dance with Peggy Sue, steal a heart from Mary-Lou” that on “Outsiders” they are merely living out their own rock n roll fantasies.

There’s some Middle Eastern, almost tribal thing happening on “Be Here Now” and things get a bit brooding on “Hell Has No Mercy” and its kind of appropriate that this lurks, darkly in the shadows, because that’s where this belongs.

Whether Vampires have slippers, I actually don’t know, but whatever after 30 years The 69 Eyes could be forgiven for putting theirs on and taking it easy. That they haven’t is to their credit. Odd to say it, perhaps, but as they enter their fourth decade, Finland’s finest have hit a career high.